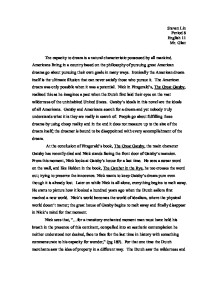 Steven Lin Period 8 English 11 Mr. Glatt The capacity to dream is a natural characteristic possessed by all mankind. Americans living in a country based on the philosophy of pursuing great American dreams go about pursuing their own goals in many ways. Ironically the American dream itself is the ultimate illusion that can never satisfy those who pursue it. The American dream was only possible when it was a potential. Nick in Fitzgerald's, The Great Gatsby, realized this as he imagines a past when the Dutch first laid their eyes on the vast wilderness of the uninhabited United States. Gatsby's ideals in this novel are the ideals of all Americans. Gatsby and Americans search for a dream and yet nobody truly understands what it is they are really in search of. People go about fulfilling these dreams by using cheap reality and in the end it does not measure up to the size of the dream itself; the dreamer is bound to be disappointed with every accomplishment of the dream. ...read more.

The Dutch saw the beauty of the land and trees and owned the land in their minds by remembering it and visualizing it. For that period of time the Dutch merchants were satisfied. But as these feelings pass them they once again saw the land as wood-cutters and owners; causing them to build fences and preserve the trees and lands for themselves. As they arrive on the land the ideas of the wood-cutter become more dominate than the ideas of the poet In many ways dreams are too immense to be satisfied by reality. This is shown in the Dutchman and in Gatsby; both had ideas and dreams so great that when they actually received what they wanted the reality wouldn't be able to live up to their expectations. Before they accomplished their dreams their possibilities were endless. For the Dutchman, before he arrived to America he carried temporary feelings of awe, where there were no limitations. ...read more.

In addition to the last chapter the reader finds that Daisy and Tom had moved to the east. From this Fitzgerald tries to pass the message that Tom and Daisy are going back to the past where the Dutch originally came from. The east was the place where the Dutch first dreamed of the greatness of America. Without knowing it Daisy and Tom moved east because of their longing for the past, where dreams were still possible. From the last paragraph of the book Fitzgerald says, "Gatsby believed in the green light, the orgastic future that year by year recedes before us. It eluded us then, but that's no matter tomorrow we will run faster, stretch out our arms farther," (182). This passage pertains that Gatsby's dream is much like our own; we as a nation are spoiled, when we want one thing we believe that it would satisfy us, but later when another thing comes up we want that as well, it is an endless cycle. Overall Fitzgerald is telling us that we are endlessly dissatisfied. ...read more.

This critical response of F. Scott Fitzgerald's 'The Great Gatsby' retains an excellent amount of focus on the proposed question. Delving into a profound analysis of the source text, this candidate does well to address both the literal and thematic ...

This critical response of F. Scott Fitzgerald's 'The Great Gatsby' retains an excellent amount of focus on the proposed question. Delving into a profound analysis of the source text, this candidate does well to address both the literal and thematic elements that render the dreams of many of the novel's character futile. There is an extremely sensitive awareness of very few quotes. This method of analysis is far more effective than commenting on an extensive range of quotes in little detail. By analysing few of the novel's most important quotes (that pertain to the question), the candidate manages to say a lot about a little, and in doing so comments at length about the novel and it's symbolism of dreams.

The Level of Analysis is very good. The is evidence of an extremely well-developed understanding of Fitzgerald's novel with the candidate not simply analysing what Fitzgerald is saying, but what he does not. The candidate takes what little Fitzgerald gives and lifts it off the page to develop their own analysis of the lesser considerd ideas that he presents. Examples include the commentary on the Dutch sailors, which at first looks like it might turn into simply outlining something that is obvious, but then relates back to the question and the topic of dream left unfulfilled by those who chase them but preserved by those who picture them and preserve them are those left most satisfied. This could be developed further into the novel's idea that chasing ideas - much like the aimless existence of those that chased The American Dream - might seem like the way forward, but because humans by default are never satisfied with what they have, they strive further to achieve better and in doing so destroy what the poets' minds preserve.

The Quality of Written Communication is excellent. With a diverse use of the English langauge, all standards expected of a GCSE and dare I say, A-Level candidate are present. The standards of grammar aer upheld, although I would argue that underlining is not an approriate method of writing a published book/poem's title. Either inverted commas or italics are the expected norm.