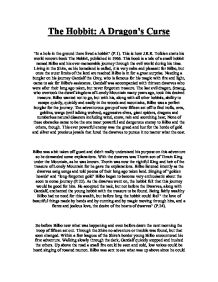 The Hobbit: A Dragon's Curse "In a hole in the ground there lived a hobbit" (P.1). This is how J.R.R. Tolkien starts his world renown book The Hobbit, published in 1966. This book is a tale of a small hobbit named Bilbo and his ever-memorable journey through the evil world during his time. Living in the Shire, as his homeland is called, it is very calm and pleasant for Bilbo, but once the outer limits of the land are reached Bilbo is in for a great surprise. Needing a burglar on his journey Gandalf the Grey, who is famous for his magic with fire and light, came to ask for Bilbo's assistance. Gandalf was accompanied with thirteen dwarves who were after their long ago taken, but never forgotten treasure. The last evil dragon, Smaug, who overtook the dwarf kingdom of Lonely Mountain many years ago, took this desired treasure. Bilbo wanted not to go, but with his, along with all other hobbits, ability to escape quietly, quickly and easily in the woods and mountains, Bilbo was a perfect burglar for the journey. ...read more.

Before long they came to the forest of Mirkwood, which proved to be another worthy opponent. In Mirkwood they encountered numberless protagonists but their own hunger drove them from the path. After loosing the path they were captured by Elves and kept prisoner. This King was not an evil kind but he distrusted the crew of now fourteen, for Gandalf had to leave and settle some further business. The king was powerful, but if he had a weakness "it was for treasure, especially for silver and white gems; and though his hoard was rich, he was ever eager for more" (P. 179). This proved to help Bilbo and his friends because they were able to bribe the king somewhat with the jewels and metals that they had not yet gained in return for their release. Bilbo, Thorin, and the others did finally escape and even though the road became less terrible Smaug still lied ahead. They reached the village of the Lakemen who lived at the base of the Lonely Mountain. These people welcomed Thorin and his companions warmly due to Thorin's position as King Under the Mountain. ...read more.

The battle lasted many moons, but with the help of the Eagle Lord and his followers the Goblins were defeated and the Wargs were slaughtered. Thorin was killed in the battle and Dain became King Under the Mountain. To settle all feuds he gave one fourteenth of his horde to both the Elves and the Lakemen, for the Dragon's curse on the horde had been broken. The Dwarves once again became free of heart and gave gifts of gold and jewels to all that helped. Bilbo was sent home with all the treasure he could handle and along with him came Gandalf. Bilbo finally arrived home and rested for many a long day. Leaving his home Bilbo was a very timid and mild hobbit, but he grew as the adventures went on. Bilbo never wanted to go on the journey, but he was caught and lured in by the tales and legends of the Dragon's gold. Fighting off many, many evil things Bilbo only escaped with life by a narrow margin many times. No obstacle was as heavy upon his heart and as hard to kill, though, as the lust and greed that he (along with the Dwarves, Elves, Goblins, and Wargs) had for the treasure that Smaug so greedily slept upon night after night without use. ...read more.