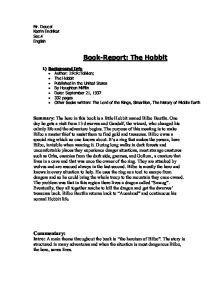 Mr. Doucet Katrin Endrikat Sec.4 English Book-Report: The Hobbit 1) Background Info * Author: J:R:R:Tolkien; * The Hobbit * Published in the United States * By Houghton Mifflin * Date: September 21, 1937 * 332 pages * Other books written: The Lord of the Rings, Simarillon, The history of Middle Earth Summary: The hero in this book is a little Hobbit named Bilbo Beutlin. One day he gets a visit from 13 dwarves and Gandalf, the wizard, who changed his calmly life and the adventure begins. The purpose of this meeting is to make Bilbo a master thief to assist them to find gold and treasures. Bilbo owns a special ring which no one knows about. It's a ring that makes the person, here Bilbo, invisible when wearing it. During long walks in dark forests and uncomfortable places they experience danger situations, meet strange creatures such as Orks, enemies from the dark side, gnomes, and Gollum, a creature that lives in a cave and that was once the owner of the ring. ...read more.

He is the leader to get the treasure back for the dwarves. He proves himself as a champion since he fights for a good cause, in chapter 8. He kills the spider, an evil animal, and shows that he has abilities for being a good fighter. Bilbo, as the principal character along the story, has carries responsibility for the troop. Becoming and being a hero can be a very dangerous judgement. Bilbo is asked by Gandalf but in fact this is not his active decision. Refusing this offer was not a real option. The hero is celebrated for bold exploits, for example when he puts himself in life danger to save someone else's life. He earns the applause from the group and possibly from the reader. It is said that a hero can't show his feelings without becoming a looser at the same time. A hero has to be emotionally strong and has to act like a god. Heroes are famous for their independence of others. In my point of view, a hero has to remain a fairly normal person. ...read more.

Bilbo uses a tool, the magical ring, which could represent an object for heroism. No one else is allowed to wear it, except for the hero. The question that pops up in this context is whether Bilbo is born as a hero or does the power of the ring makes him to be a hero? I think Bilbo would be an exceptional individual also without the help of the magic ring. This is shown in the scene where Bilbo gets possession of the ring. Thus, the ring just substantiates Bilbo in his heroism. Objects, even just symbolically objects, can give physically strength. It gives the hero a "safe hand" that when you believe in it, it'll help you. The magical ring Bilbo owns, gives him more than just physical strength, it can really protect him by making him transparent or invisible. It probably makes him feel more secure and more self-confident. Conclusion: Bilbo is a real hero and the magic ring assists him in solving all the challenges and in helping the dwarves to get back their treasure. Despite of all his successes and achievements he remains a sympathetic person and the reader can identify himself with Bilbo. ...read more.