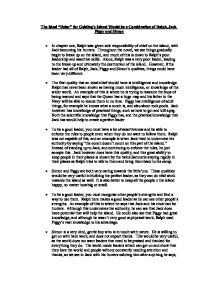 &quot;The Ideal &quot;Ruler&quot; for Golding's Island Would be a Combination of Ralph, Jack Piggy and Simon&quot; Discuss

The Ideal "Ruler" for Golding's Island Would be a Combination of Ralph, Jack Piggy and Simon * In chapter one, Ralph was given sole responsibility of chief on the island, with Jack becoming his hunters. Throughout the novel, we see things gradually begin to break up on the island, and much of this is down to Ralph's poor leadership and assertive skills. Alone, Ralph was a very poor leader, leading to the break-up and ultimately the destruction of the island. However, if the leader had all of Ralph, Jack, Piggy and Simon's qualities, things could have been very different. * The first quality that an ideal chief should have is intelligence and knowledge. Ralph has never been shown as having much intelligence, or knowledge of the wider world. An example of this is where he is trying to reassure the boys of being rescued and says that the Queen has a huge map and his father in the Navy will be able to rescue them in no time. ...read more.

Although this undermines his authority, he can see that Jack does have potential that will help the island. He could also see that Piggy had great knowledge, and although he wasn't very good at physical work, Ralph used Piggy's vast knowledge to his advantage. * Simon is a very kind, gentle boy who is in touch with nature. He is willing to get on with hard work, and does not expect thanks. This would be very useful, as the world does not want leaders that need to be praised and thanked for everything they do. The world needs leaders which can get on and show that they love the world and people without constantly needing attention and thanks, as we see in Jack with his hunters saluting him after anything he says, * Simon and Ralph both hold good life-giving values. An example of this is how Ralph wants the boys to stay clean, and not wear war paint and to tidy their hair. ...read more.

Piggy has so much knowledge, and is the voice of reason between the group. This quality would help to create the perfect leader, as disputes between other people on the island/in the world need to be sorted out by someone who can see reason. However he is not good at communicating, and this would need the skills of either Ralph or Jack to sort out the dispute. Simon is very spiritually aware, and is capable of getting on with a task with receiving no thanks. This quality would be very useful on the island/to the world as you often need a "right hand man" to help instruct the main leader who receives little or no thanks. * Looking at these points, we can see that combined, Ralph ,Jack, Piggy and Simon would all form the perfect leader if we drew only on their strengths and put aside their weaknesses. On the world stage Golding was trying to show that if we all pull together, and each draw on everyone's good points but forget the bad points, we will have perfect leaders and the world will be able to get on in harmony. ...read more.

The answer here addresses the question in a way that hinders the candidate's knowledge quite substantially, and the lack of cohesive essay format also limits the mark awarded. The topic of leadership in Golding's 'Lord of the Flies' is highly ...

The answer here addresses the question in a way that hinders the candidate's knowledge quite substantially, and the lack of cohesive essay format also limits the mark awarded. The topic of leadership in Golding's 'Lord of the Flies' is highly sensitive and the question sets itself out well. Where the structure is apparent here in these bullet-pointed paragraphs, the candidate appears to have used a structure that concerns each paragraph with a different attribute of a effective leader. This is not a wise decision to make as the skills required to be a good leader are then subjective to the candidate and subjective comments are not analytical. To ensure objectivity, take the question, discuss each character mentioned in turn and then analyse what Golding presents in their personalities. What kind of person is Jack? What are his attitudes to the little'uns? To Piggy? Where are his main priorities? What does he want from the island and the boys? In doing this, the candidate would be addressing each character in turn and as well as showing an in-depth understanding of their character and the relationships with others, they would not make up what they believe to be good leadership traits, but looking at what skills the boys do have and analysing the compatibility and appropriateness of that character being leader. Each character has some traits the lend themselves well and some traits that don't. These need to be recognised and are far easier to identify if the structure I have detailed were to be employed.

The Level of Analysis here is good, as the candidate demonstrates a good understanding of the tool of analysis and how to implement them to a good depth of analysis. However, there appears to be a fundamental misunderstanding of some of the characters. Whilst yes, Ralph could be argued as a poor leader, it was not his "poor leadership and assertive skills" that caused the boys rebel and degrade into savages. Jack Merridew and the absence of authority and society were the main causes of that. To suggest otherwise may seem trivial, but it conflicts with the authorial intentions of the novel and thus is one of the very few times in an question that interpretation can play such a large part in that the candidate is almost always incorrect.
Elsewhere, the depth is more convincing but yet again there is a suggestion that this candidate does not fully appreciate Golding's characters and.or has trouble expressing what Golding wanted to be expressed when reading the novel. The novel is deliberately allegoric and therefore each character represents something symbolic, with nuances of other traits so that they are more naturalistic. Simon is depicted as "God-like"; Ralph is said to be the most assertive and level-headed; Jack is subjected to the most evil of the four characters here - he becomes bloodthirsty and the king of hunters; Piggy however is quite hopeless physically but he is very smart. His glasses represent the clarity of sight and a clear mind in decision-making and seeing sense. Could it not be argued this is a good skill to have as a leader? And what of Ralph's assertiveness? His repentance? (Ralph is described as having "wept for the loss of humanity", being the only boy to do so by realising the savagery the boys had descended to). There are telling signs about the characters and there very being is symbolic of something. If the candidate identifies the symbol, then they need not hunt down for a good leadership trait, because it should be apparent that, for example, Jack's command, authority and requited respect with his choir makes him a good leader, but his bloodthirst and hunger to be rebellious because of the lack of adult authority blinds his vision and makes him sardonically intolerant of characters like Piggy, and this could be argued to be a bad trait as it shows unequal treatment from the leader.

The Quality of Written Communication is fair. The candidate's handling of English suits and adheres to all necessary requirements that Standard English asks for; there are no colloquialisms, shorthand expression of abbreviations. I will however mention again that it is not orthodox to see an essay split into bullet-pointed paragraphs. This creates a fragmented reading style and disrupts the fluency of the analysis. It should be avoided in exams.