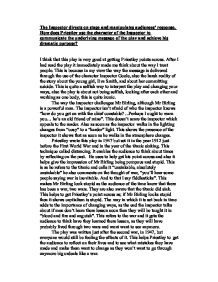 The Inspector directs on stage and manipulates audiences' response. How does Priestley use the character of the Inspector to communicate the underlying message of the play and achieve his dramatic purpose?

The Inspector directs on stage and manipulates audiences' response. How does Priestley use the character of the Inspector to communicate the underlying message of the play and achieve his dramatic purpose? I think that this play is very good at getting Priestley points across. After I had read the play it immediately made me think about the way I treat people. This is because in my view the way the message is delivered through the use of the character Inspector Goole, also the harsh reality of the story about the young girl, Eva Smith, and about her committing suicide. This is quite a selfish way to interpret the play and changing your ways, also the play is about not being selfish, looking after each other and working as one body, this is quite ironic. The way the inspector challenges Mr Birling, although Mr Birling is a powerful man. The inspector isn't afraid of who the inspector knows "how do you get on with the chief constable? ...Perhaps I ought to warn you... he's an old friend of mine". This doesn't scare the inspector which appeals to the reader. Also as soon as the inspector walks in the lighting changes from "cosy" to a "harder" light. This shows the presence of the inspector it shows that as soon as he walks in the atmosphere changes. Priestley wrote this play in 1947 but set it in the year 1912 just before the First World War and in the year of the titanic sinking. This technique called distancing. It enables the audience to think about times by reflecting on the past. He uses to help get his point across and also it helps give the impression of Mr Birling being pompous and stupid. This is as he refers to the titanic and calls it "unsinkable, absolutely unsinkable" he also comments on the thought of war, "you'll hear some people saying war is inevitable. ...read more.

This shows that there wasn't anything wrong in just asking for higher wages. Although Mr Birling is a strong believer of the capitalist views when the Eric brings up the speech Birling has just gave on looking after yourself and family, Birling is keen to dismiss it and not talk in front of the inspector about it. This shows that although he has strong beliefs he knows the inspector has the opposite views and it shows that Birling is afraid to confront him about it. At the start of this play we are led to believe that it is going to be a murder mystery play but instead we find out it is a morality play. The reader wouldn't find out it is just going to be a morality play until it as finished. This would have made the ending a bit of anticlimax for the audience as they would have been expecting a big mystery to unravel whereas it ends more abruptly but it does have the added mystery of what is going to happen when the real inspector visits them. The inspector is at The Birling's household to investigate the suicide of a girl called Eva Smith. He goes into depth about the incidents running up to the death of this girl. This seems odd to the audience as they would have wondered why the inspector is asking questions about her being discharged from work as it bears no reference to her death and its not illegal so the inspector didn't need to investigate that. Also the other events running up to her death like her getting fired from her department store job, in "Milwards", her relationship with Gerald and also her conversation with the group that helps women headed by Mrs Birling weren't necessary in investigations. The only person out f the Birling family that the inspector needed to talk to was Eric, this is as his involvement with this girl, Eva Smith, was the only one out of the family's involvements with her that was illegal. ...read more.

This is shown in the stage directions as it comments on all characters such as Sheila were it says "Sheila is still quietly crying". This time were all the characters are in thought acts like a time for the audience to reflect on pass experiences and think about how they are going to treat people in future. The younger generation react to the inspector better then the older generation as they are much more willing to change their views and accept that the inspector is right, whereas the older generation feel that they don't have to change their ways as the inspector wasn't real so none of it counts. There is a final twist at the end of the play when they find out that a real inspector is coming around to ask them a few questions concerning the suicide of a girl. This would appeal to the audience as they would have wanted to see some justice. This is the effect of the inspector as even though the crimes weren't legal crimes and just moral crimes the audience see them as crimes that should be punished. At the end of the play I immediately thought about how I treat people. It showed that Priestley's achieved his dramatic purpose. Although the inspector is not a realistic person it doesn't take anything away from the point of the play. After the play I didn't feel that because the inspector wasn't realistic that there wasn't anything to think about I still considered it very real and that it is important to think about personal past experiences and think about your views. I think the way the underlying message is put across is very clear and I think it would have challenged people's thoughts. Priestley's techniques of getting his message a very successful and which makes the message clear and precise. I think this play is very good at getting its message across. Although it isn't as action packed as a modern audience would expect I still think it would be a good play to see and it would definitely help you to change your views. ...read more.