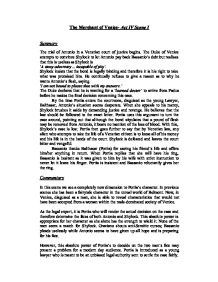 The Merchant of Venice- Act IV Scene I - Summary

The Merchant of Venice- Act IV Scene I Summary The trial of Antonio in a Venetian court of justice begins. The Duke of Venice attempts to convince Shylock to let Antonio pay back Bassanio's debt but realises that this is useless as Shylock is 'A stony adversary... incapable of pity'. Shylock insists that the bond is legally binding and therefore it is his right to take what was promised him. He continually refuses to give a reason as to why he wants Antonio's flesh, saying 'I am not bound to please thee with my answers.' The Duke declares that he is wanting for a 'learned doctor' to arrive from Padua before he makes the final decision concerning this case. By the time Portia enters the courtroom, disguised as the young Lawyer, Balthasar, Antonio's situation seems desperate. When she appeals to his mercy, Shylock brushes it aside by demanding justice and revenge. He believes that the law should be followed to the exact letter. Portia uses this argument to turn the case around, pointing out that although the bond stipulates that a pound of flesh may be removed from Antonio, it bears no mention of the loss of blood. ...read more.

In this scene, Portia not only releases Antonio from the bond but effectively strips Shylock of both his religion and his livelihood, leaving him unable to inflict or even threaten further damage. This fulfils Shakespeare's criteria of a comedy in that the villain must be defeated. This would not have been difficult to accept by a Shakespearean audience who would have most likely met Shylock's demise with a similar reaction to Graziano's cruel, ecstatic glee. They would not have been troubled by Shylock's forced conversion to Christianity. However, it is more difficult for a modern day audience to rejoice in Portia's success. Ultimately, Shylock's pursuit for the exact letter of the law regardless of mercy or compassion, ultimately undoes him. Yet although the court's verdict is consistent with Shylock's crimes, it follows the same rigid and severe reading of the law as Shylock. Before giving Shylock his punishment the Duke says to him that he hoped that Shylock would, 'see the difference of our spirit.' But the spirit of the Venetian proves as vindictive as the Jews. Shylock looses everything in the course of the play except for his life and a modern audience cannot help but feel sorry for him. ...read more.