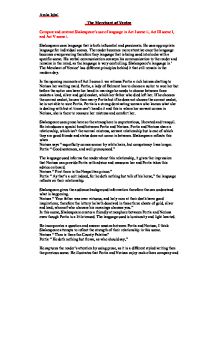 The Merchant of Venice - Compare and contrast Shakespeare's use of language in Act I scene ii, Act III scene I, and Act V scene i.

The Merchant of Venice Compare and contrast Shakespeare's use of language in Act I scene ii, Act III scene I, and Act V scene i. Shakespeare uses language that is both influential and passionate. He uses appropriate language for individual scenes. The reader becomes more attentive once the language becomes overpowering therefore they language that is being used interlocks with a specific scene. His verbal communication conveys his communication to the reader and remains in the mind, as the language is very controlling. Shakespeare's language in ' The Merchant of Venice' has different principles behind it that still remain in the modern day. In the opening moments of Act I scene ii we witness Portia a rich heiress chatting to Nerissa her waiting maid. Portia, a lady of Belmont has to choose a suitor to woe her but before the suitor can have her hand in marriage he needs to choose between three caskets a lead, silver and gold casket, which her father who died left her. If he chooses the correct casket, he can then marry Portia but if he does not choose the correct casket, he is not able to woe Portia. Portia is a strong dominating woman who knows what she is dealing with but at times can't handle it and this is where her servant comes in Nerissa, she is there to reassure her mistress and comfort her. ...read more.

Shylock makes a significant statement of the human equality. "If you poison us, will we not die?" Shakespeare builds up the climax and tension till the very end of the speech. He reveals all at the end. " And if you wrong us, shall we not revenge?" Shakespeare repeats "revenge" to emphasise his hurt towards his daughter and Antonio who he lent his money to. The speech is vibrant and the truth and nothing but the truth that it can't be debatable. " If a Jew wrong a Christian, what is the humility? Revenge" The language William Shakespeare uses to describe Shylock in the opening moments of the play is totally different to what he is actually seen later in the play. This whole speech gives a whole different perspective of Shylock. Shylock is seen as cunning, ruthless and sly that cons people out and trap them into debt but we acknowledge a different surface to him. The stage directions inform us of his sanity "he weeps" and his words "Fed with the same food, hurt with the same weapons" Help reflect his human feelings and emotions. News of his daughter adds to the venom. He can't believe what his own flesh and blood had done to him. " I would my daughter were dead at my foot, and the jewels in her ear!" Shakespeare gives us some detail of Shylock in full depth of vulnerable humanity most notable at the detail of the turquoise. ...read more.

William Shakespeare use of prose and verse in these three sections illustrates the strength of the language. In Act I scene ii we distinguish Portia and Nerissa gossiping like women do it's a unique relationship between a servant and mistress. Shakespeare uses prose here to reflect the relationship between the two women whereas in Act III scene i we witness a powerful scene where we spectator Shylock's rage for being discriminated against his race and religion. The language is vibrant and vivid which makes it a memorable scene for the reader. It is written in prose but has poetic feel to it. However in Act V scene i we observe Jessica and Lorenzo's passion for each other. This scene has many adjectives, as it is very poetic. It is in verses therefore it gives an idyllic and tranquil scene and feel as though Jessica and Lorenzo are in a world of their own. Shakespeare uses outstanding language to describe emotions, sincerity and judgment. He conveys his message by using significant language that the reader can connect with. He employs specific language for individual scenes therefore the language interlocks with every other scene. Shakespeare uses a variety of techniques to write his plays and each one has it own individuality. ' The Merchant of Venice' was a book with complexity but William Shakespeare used his incredible techniques and was keen to clarify the complexity by the exceptional language he used to describe the characters emotions and feelings. Aysha Iqbal ...read more.