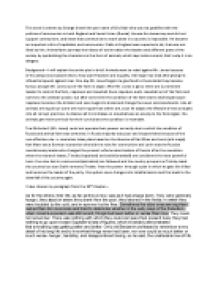 ﻿This novel is written by George Orwell the pen name of Eric Blair who was not gratified with the policies of communism in both England and Soviet Union (Russia). He was for democracy and did not support communism, and knew that communism to work alone in a country is impossible. He became an important critic of capitalism and communism. Stalin in England was respected a lot, that was not liked by him. Animal farm portrays the history of soviet nation the leaders and different parts of the society by symbolizing the characters in the form of animals, which lays inside a moral, that?s why it is an allegory. Background?I will explain the entire plot in brief. Animals want to rebel against Mr. Jones because of his callousness towards them, they want freedom and equality. Old major has died after giving his influential speech against man. One day Mr. Jones forgets to give food to the animals they become furious and get Mr. Jones out of the farm in anger. ...read more.

this system soon changes into totalitarianism and this leads to the downfall of the country again. I have chosen my paragraph from the 10th chapter? As for the others, their life, as far as they knew, was as it had always been. They were generally hungry, they slept on straw, they drank from the pool, they labored in the fields; in winter they were troubled by the cold, and in summer by the flies. Sometimes the older ones among them racked their dim memories and tried to determine whether in the early days of the Rebellion, when Jones's expulsion was still recent, things had been better or worse than now. They could not remember. There was nothing with which they could compare their present lives: they had nothing to go upon except Squealer's lists of figures, which invariably demonstrated that everything was getting better and better. Only old Benjamin professed to remember every detail of his long life and to know that things never had been, nor ever could be much better or much worse?hunger, hardship, and disappointment being, so he said, the unalterable law of life. ...read more.

That is the question; whenever there is a space for a major power, the other political leaders perform filthy deeds to attain that position and to become the ultimate leaders. Most of the time, there rule is effective for some time but in the long run they fail because they have all the power to themselves to misuse. That is why communism never works the communist leader soon tends to become the dictator or leading to the system of totalitarianism hence leading to the downfall. Animal farm is the best example for such a decline after the revolution. The same is the case with some of the countries like Russia, north Korea, Libya, yemen, etc. they got and are getting freedom from the dominating governments. The solution to this problem is democracy where the power is majorly with the citizens. By the people, for the people , of the people, so indirectly all the power is in the hands of the citizens. Where citizens are given the basic and political rights that they possess. They elect the government; the government serves and work for them. ...read more.