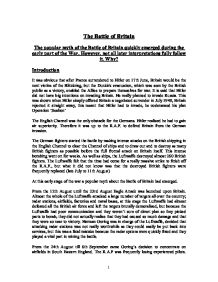 The popular myth of the Battle of Britain quickly emerged during the early part of the War. However, not all later interpretations fully follow it. Why?

The Battle of Britain The popular myth of the Battle of Britain quickly emerged during the early part of the War. However, not all later interpretations fully follow it. Why? Introduction It was obvious that after France surrendered to Hitler on 17th June, Britain would be the next victim of the Blitzkrieg, but the Dunkirk evacuation, which was seen by the British public as a victory, enabled the Allies to prepare themselves for war. It is said that Hitler did not have big intentions on invading Britain. He really planned to invade Russia. This was shown when Hitler simply offered Britain a negotiated surrender in July 1940, Britain rejected it straight away, this meant that Hitler had to invade, he codenamed his plan Operation 'Sealion' The English Channel was the only obstacle for the Germans. Hitler realised he had to gain air superiority. Therefore it was up to the R.A.F. to defend Britain from the German invasion. The German fighters started the battle by making intense attacks on the British shipping in the English Channel to clear the Channel of ships and to draw out and to destroy as many British fighters as possible before the full frontal attack on Britain itself. This intense bombing went on for weeks. As well as ships, the Luftwaffe destroyed almost 260 British fighters. The Luftwaffe felt that the time had come for a really massive strike to finish off the R.A.F., but what it did not know was that the destroyed British fighters were frequently replaced (late July to 11th August) At this early stage of the war a popular myth about the Battle of Britain had emerged. From the 12th August until the 23rd August Eagle Attack was launched upon Britain. Almost the whole of the Luftwaffe attacked a large number of targets all over the country; radar stations, airfields, factories and naval bases, at this stage the Luftwaffe had almost defeated all the British air force and left the targets brutally demoralised, but because ...read more.

He mentions Dowding and says how he could not defeat the enemy. He says that the British plans were better than 'anything the Germans had produced' which I know is true. Lastly he mentions the radar systems in an in direct way. All of these were not mentioned in the earlier interpretations. He has mentioned all of the above so that his article appeals to its readers. Maybe he wrote this article for propaganda, but this is unlikely because the outcome of the battle is known and there is no need for propaganda. This article should be quite reliable because it is written by a historian, meaning that his writing should be well researched, but he had very traditional and patriotic views and was not afraid to include his own personal views in his writing of history, which makes his writing unreliable because some of the things he says may only be his own view of what happened, also he is nationalistic and biased because he is British, and therefore he probably would have exaggerated, although by reading some of the things he has mentioned, we can see that he has done good research. He has the benefit of hindsight, which means that he could look back at the earlier war events. The next interpretation is by J.R.M. Butler in 1957, this was after the war, when the government authorized the official history of the Second World War and invited distinguished military historians to write a book. This interpretation shows how the British had success. It mentions that Hitler was defeated, but he did not intend on invading Britain, he really wanted to invade Russia. Hitler's plan was that when he invaded Britain and crumbled the British morale, he would then go on to 'operation Barbarossa' which was a codename for the invasion of Russia and then he would go on to invade the rest of Europe. ...read more.

* To make the public realise that the pilots have played a role in defending Britain, and so should they. * To boost the morale of the pilots, to make them think that they were winning even though they were outnumbered. * Makes people want to believe they are winning even if they are not. The people believed the myth because it was all around them (on posters, in radios, newsreels, in newspapers and in Churchill's famous speeches) and they constantly heard it. Also the government was in control of all the means of media, so they only showed/told people what they wanted the people to see/hear. Later interpretations differ from earlier one (how-mentioned above in part2) because know the outcome of the Battle is known- the British have won. The German side of the story was being hared, they were written not for propaganda, they are aimed at different people e.g. students. At the early stages of the war all they wanted to do is to distract people with the myth, they did not care about anything else. But when the war was over, historians only then had the benefit of hindsight and only then did they realise other factors that bought Britain to victory e.g. radars. Also I think that Hitler had not really intended on invading Britain, he really wanted Russia but when Britain rejected the peace treaty made him angry and he also used the Battle of Britain as a cover up of his secret planning of an invasion on Russia (operation Barbarossa). Also he admired the Britain, whose empire he believed powerfully reinforced his ideas of racial domination. The help o all the other nations pilots helped win the Battle, because the British were already outnumbered. The nations that sent their fighter were, Australian, New Zealand, Canadian, South African, Southern Rudician, Irish, American, Polish, Czech, Belgium, French and Israeli. All the factors that were mentioned above helped the British win the Battle of Britain. 1 ...read more.