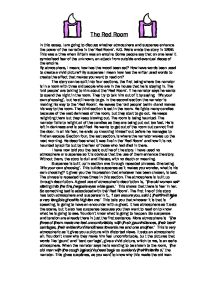 The Red Room In this essay, I am going to discuss whether atmosphere and suspense enhance the power of the narrative in the 'Red Room'. H.G. Wells wrote the story in 1896. This was a time when Britain was an empire. Some people say that on one level it symbolised fear of the unknown, an attack from outside and eventual decay of the empire. By atmosphere, I mean; how has the mood been set? How have words been used to create a vivid picture? By suspense I mean how has the writer used words to create the effect that makes you want to read on? The story can be split into four sections, the first being where the narrator is in a room with three old people who are in the house that he is staying in. The 'old people' are talking to him about the 'Red Room'. The narrator says he wants to spend the night in the room. They try to talk him out of it by saying, 'It's your own choosing', but he still wants to go. In the second section the narrator is making his way to the 'Red Room'. He leaves the 'old people' behind and makes his way to the room. The third section is set in the room. He lights many candles because of the vast darkness of the room, but they start to go out. He keeps relighting them but they keep blowing out. The room is being haunted. ...read more.

So you read on, to find out. The phrase is then repeated near the end of the section. Just as the narrator is leaving for the room, he looks back and sees the old people, 'and saw they were all close together, dark against the firelight, staring at me over their shoulders, with an intent expression on their ancient faces.' This quote has both atmosphere and suspense as it gives an eerie picture of fear but you want to read on, to find out what happens. Just before he leaves the old man repeats, 'It is your own choosing,' In section two, atmosphere is set in the first line, 'I left the door wide open until the candle was well alight, and then I shut them in and walked down the chilly, echoing passage,' This sets the scene as being scary and intimidating. It shows a slight fear in the narrator when all the rest of the time, he has been seemingly calm. As he carries on down the passage it comments on the surroundings, 'The ornaments and conveniences of the room about them were ghostly-,' This makes it more eerie as we get closer to the 'haunted' room. 'A shadow came sweeping up after me, and one fled before me into the darkness overhead,' This is good suspense. It enhances the paragraph by making you wonder what the shadows are. Are they ghosts? You don't know. It only describes them as shadows and shadows are eerie anyway. ...read more.

This is where the narrator is knocked out. You never know what has knocked him out but you can guess that he was so scared that he fell over and struck his head. The last section is where the narrator wakes up in the morning. The old people are standing over him. This is atmospheric because at the beginning of the story, the old people seemed cold towards him, and now they are caring for him. In this the narrator tells that the room is not haunted by a 'ghost of earl nor ghost of countess in that room, there is no ghost there at all; but worse, far worse-' Suspense is here because you want to know what is worse than a ghost? What is haunting the room? 'The worst of all the things that haunt poor mortal man, and that is in all its nakedness-fear!' The story is brought to a close with this sentence, 'black fear, and there will be - so long as this house of sin endures.' This gives suspense even though it is the last line! It leaves you wondering what will happen to all the people who live in the house? Will they come to an end like the others and turn into the fear, which haunts the room? By Sammi Leach. So from this you can see that yes, the suspense and atmosphere enhance the power of the narrative. It enhances it by using words of description and words of tension. Without these words the story would not be worth reading. It would be dull and lifeless. ...read more.