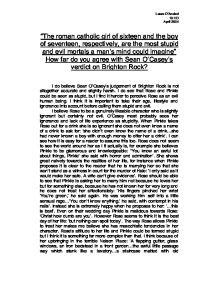 &quot;The roman catholic girl of sixteen and the boy of seventeen, respectively, are the most stupid and evil mortals a man's mind could imagine&quot; - How far do you agree with Sean O'Casey's verdict on Brighton Rock?

"The roman catholic girl of sixteen and the boy of seventeen, respectively, are the most stupid and evil mortals a man's mind could imagine" How far do you agree with Sean O'Casey's verdict on Brighton Rock? I do believe Sean O'Casey's judgement of Brighton Rock is not altogether accurate and slightly harsh. I do see that Rose and Pinkie could be seen as stupid, but I find it harder to perceive Rose as an evil human being. I think it is important to take their age, lifestyle and ignorance into account before calling them stupid and evil. I believe Rose to be a genuinely likeable character who is slightly ignorant but certainly not evil. O'Casey most probably sees her ignorance and lack of life experience as stupidity. When Pinkie takes Rose out for a drink she is so ignorant she does not even know a name of a drink to ask for: 'she didn't even know the name of a drink...she had never known a boy with enough money to offer her a drink'. I can see how it is easy for a reader to assume this too. Rose does not seem to see the world around her as I it actually is, for example she believes Pinkie to be glamorous and knowledgeable: ''You know an awful lot about things, Pinkie' she said with horror and admiration'. She shows great naivety towards the realities of her life, for instance when Pinkie proposes it is clear to the reader that he is marrying her so that ...read more.

It seems to the reader that Rose has been corrupted by Pinkie; he has really brought something bad out of her that makes her want to be damned with him. Although suicide is, religiously, an evil thing to do I don't believe Rose is evil, I think she is just madly in love with Pinkie: 'A light lit his face and left it; a frown, a thought, a child's face: she felt responsibility move in her breasts; she wouldn't let him go into that darkness alone'. Rose's love for Pinkie comes across maternal and this explains why she has such trouble with the thought of being without him. Although Rose's devotion to Pinkie seems quite scary it is also quite admirable that she will do anything for him, even sacrifice her place in heaven; this could be considered to be an act of stupidity but it is certainly an act of dedication. When you first look at Pinkie's character he seems to be a stereotypical evil character. The way in which Pinkie talks makes me think he wants to be an evil film-like gangster: 'You should read the inquests'. Pinkie desperately wants to be a respected villain like Colleoni and the fact that no one will treat him in this way, I believe makes him more bitter: 'he had to show someone he was - a man...he suddenly shouted aloud, 'I want service,'...a voice said 'there isn't a table'. ...read more.

Even though Pinkie accepts that he feels a strange kind of affection for Rose he still is prepared to let herself commit suicide: 'I'll take a walk an' you stay here. When it's over, I'll come back an' do it too'. This is without a doubt an utterly evil thing to do; he is letting Rose go against her religion and commit suicide because she thinks that he will to, when he actually has no intention of killing himself. Pinkie accepts hell but not heaven: ''Of course there's Hell. Flames and damnation,' he said...'And Heaven too,' Rose said...'Oh, maybe,' the boy said'. I think Pinkie cannot envisage Heaven because he has never experienced happiness, so an eternity of happiness and peacefulness is alien to him. Therefore he can only imagine Hell because he only knows sin, unhappiness and evil, and he thinks that is where he will end up. In conclusion I do not find Rose either stupid or evil, I think she is just ignorant and na�ve and that is why she falls in love with Pinkie. I do not find Pinkie stupid but I do think he is evil, but through no fault of his own. His terrible childhood I think is responsible for the terrible young man he became. Although it became apparent that Pinkie was capable of a kind of love it was not enough in my mind to redeem him for the ruthless murders he committed or the terrible way he treated others. Laura D'Anzieri 10 HD April 2004 ...read more.