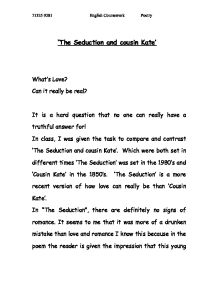 'The Seduction and cousin Kate' What's Love? Can it really be real? It is a hard question that no one can really have a truthful answer for!

'The Seduction and cousin Kate' What's Love? Can it really be real? It is a hard question that no one can really have a truthful answer for! In class, I was given the task to compare and contrast 'The Seduction and cousin Kate'. Which were both set in different times 'The Seduction' was set in the 1980's and 'Cousin Kate' in the 1850's. 'The Seduction' is a more recent version of how love can really be than 'Cousin Kate'. In "The Seduction", there are definitely no signs of romance. It seems to me that it was more of a drunken mistake than love and romance I know this because in the poem the reader is given the impression that this young girl is mislead by a boy who is neither worried about his or her life. ...read more.

In my opinion in both of these poems these men are leading the girls astray and then seducing them. The boy in "The Seduction" had the evening planned for this young girl or any other foolish girl, we know this because we are told he takes Listerine to hide the nicotine breath. His plan only works when the girl becomes extremely drunk though whereas in cousin Kate it was quite different as the lord watched the girl when she was a "cottage maiden" and he wooed her to his palace home. In these poems one girl is disgusted while the other was pleased. This is because following their sexual activity it lead to pregnancy. The girl in the Seduction was quite disgusted with herself because she was only fifteen, nearly sixteen, and is sitting o'levels in June what are her chances of getting them now? ...read more.

Although he may not know it, it would seem that the lady he married is in fact infertile so he will come running back. This to me shows that the girl is quite happy with her baby as the lord will need someone to be heir to the throne. In conclusion I have decided that I prefer cousin Kate to "The Seduction" this is because I can see that there are good and bad sides to this young girls situation. Although she lost her innocence through a man that did not care a great deal for her he will eventually have to care. The speaker became pregnant and gave birth to a boy. This will mean that he will have to come back to the speaker so she is in a more powerful position than the girl in "The Seduction". This poem is more hopeful. 71325 9281 English Coursework Poetry ...read more.