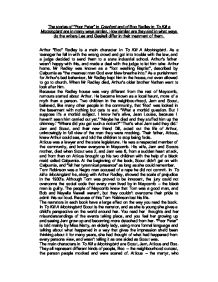 The stories of &quot;Poor Peter&quot; in Cranford and of Boo Radley in To Kill a Mockingbird are in many ways similar - How similar are they and in what ways do the writers Lee and Gaskell differ in their treatment of them.

The stories of "Poor Peter" in Cranford and of Boo Radley in To Kill a Mockingbird are in many ways similar. How similar are they and in what ways do the writers Lee and Gaskell differ in their treatment of them. Arthur "Boo" Radley is a main character in To Kill A Mockingbird. As a teenager he fell in with the wrong crowd and got into trouble with the law, and a judge decided to send them to a state industrial school. Arthur's father wasn't happy with this, and made a deal with the judge to let him take Arthur home. Mr Radley was known as a "foot washing Baptist", described by Calpurnia as "the meanest man God ever blew breathe into." As a punishment for Arthur's bad behaviour, Mr Radley kept him in the house, not even allowed to go to church. When Mr Radley died, Arthur's older brother Nathan went to look after him. Because the Radley house was very different from the rest of Maycomb, rumours started about Arthur. He became known as a local haunt, more of a myth than a person. Two children in the neighbourhood, Jem and Scout, believed, like many other people in the community, that 'Boo' was locked in the basement with nothing but cats to eat. ...read more.

a man of high moral standard and someone who can only live with himself if he knows he has done the right thing. He is a widower trying to bring up two children well in a world of racism and prejudice. He doesn't want Jem and Scout to believe what people say because it's a common belief. This is shown when he tells them to stop tormenting Boo, and also when he defends Tom Robinson in court, not because he was made to but because it was the right thing to do. "This case, Tom Robinson's case, is something that goes down to the essence of a man's conscience - Scout, I couldn't live with myself if I didn't try to help that man." The main characters in "Poor Peter" (Cranford) are Peter, his mother, father and Miss Matty. Peter, a joker, was treated harshly by his father, and although at the time Peter's father believed that "he richly deserved it" afterwards he regretted his actions and felt very guilty and remorseful, "He would, perhaps, speak in his old way - laying down the law, as it were - and then, in a minute or two, he would come round and put his hand on our shoulders, and ask us in a low voice if he had said anything to hurt us." ...read more.

A judge decided to send them to a state industrial school, which was no disgrace. But, Mr Radley was strongly religious, a "foot washing Baptist" And Calpurnia called him Mr Radley thought it was. He made a deal with the judge to take his son home, and the rest of the boys got a very good education while Arthur was hidden away and not seen for over a decade. Because Arthur was never seen, he turned into more of a myth than a real person. Because the Radley house was different from the rest of the neighbourhood, ("The doors of the Radley house were closed on weekdays as well as Sundays") rumours started about Arthur, that he was locked in a basement with nothing to eat but cats, and anything on his land would kill you. The community didn't accept different people very well, they thought they were evil or insane, and shunned them from the community. This also happened in Cranford. Peter felt that he had disappointed his family so much that he had to leave, and he was sorry that he had to. "Mother, I am come to say, God bless you for ever" 'I saw his lips quiver as he spoke; and I think he durst not say anything more loving, for the purpose was in his heart' ...read more.