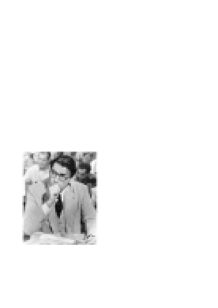 The Theme of Courage in &quot;To Kill a Mockingbird&quot;.

﻿________________ Table Content Abstract ? PART ONE ? Introduction 2.0 ? Bibliographical background 3.0 ? Courage in Plot - Summaries 3.1 ? Courage in Setting ? Maycomb 3.2 ? Courage in Character- Atticus Finch and Mrs. Dubose 4.0 ? Conclusion ________________ ABSTRACT ?This report investigates the theme of courage in novel ?to kill a mockingbird? and examines it though the theme relation to the text. A brief report about the theme and discussion where courage is glorified in the book: characters, setting and plot. The author portrayal of the theme through, characters who are morally driven, setting in which racial decimations is presented and a plot that links to the theme. ? INTRODUCTION ?To Kill a Mockingbird? authored by an American novelist Harper Lee issued in the 1960?s. It quickly became a huge successful going on to win a ?Pulitzer Prize? and have been categories as by many readers ? A very classic yet with a modern twist of American literature?. The plot, characters and setting have been insecurely constructed from the author?s personal reflection of her family, neighbors and occurrences near her hometown in the 1930?s at the age of ten. ...read more.

After the trial, Bob Ewell?s swears revenge on Atticus for exposing his family life and humiliating him to the public. He goes on a violent rampage, spitting Atticus on the street of Maycomb, attempts to break into the judge?s house and finally tries to murder Scout and Jeremy after a school Halloween pageant. Jeremy brings his arm whilst Bob attacks him in the darkness a mysterious man comes to their rescue, carries Jem back to home to safety later on Scout is shocked to discover it was ?Boo?. Sheriff arrives at the scene and discovered that Bob Ewell has infect have been murdered in darkness struggle. Sheriff tries to reason with Atticus about farsightedness and morals of holding young Jeremy & Boo Radley responsible for the murder of Bob Ewell. Atticus finally agrees to the claim that the Sheriff has accidently fell on his knife and killed himself. Boo asks Scout to walk him to his front porch, Scout agrees and gets over her fears and escort him home, she than wondered how she has fantasies about this day. As she was heading back home she than puts her in his point of view. ...read more.

Harper Lee has portrayed courage as even the most indirect acts of courage does have an effect to make a difference; to be courageous it does not take power nor intelligence. Courage is doing what you know is right and acting upon it or being able to face your fears and overcome them. Telling the truth instead of denying or being in minority and yet have the courage to stand up and say no. The only courage that could redelivery you from one point to another is the courage that?s important. In conclusion, highlighted throughout the novel are both physical and moral courage, but moral courage it plays more of important role in healing a prejudiced person in Maycomb society. Although moral courage is not seen clearly by other like physical courage; physical courage is a man ready to look of face an obstacle but moral courage is knowing ? when you know you?re liked before you begin but you begin anyway and get it through a matter what. You rarely win, but sometimes you do? ? Atticus Finch. ________________ Reference http://www.antiessays.com/ http://en.wikipedia.org/wiki/To_Kill_a_Mockingbird http://www.sparknotes.com/lit/mocking/ ...read more.