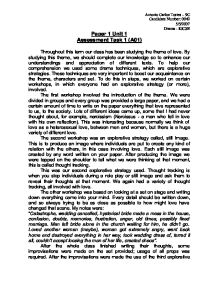 The theme of love. By studying this theme, we should complete our knowledge so to enhance our understandings and appreciation of different texts. To help our comprehension we used some drama techniques

Paper 1 Unit 1 Assessment Task 1 (A01) Throughout this term our class has been studying the theme of love. By studying this theme, we should complete our knowledge so to enhance our understandings and appreciation of different texts. To help our comprehension we used some drama techniques, which are explorative strategies. These techniques are very important to boost our acquaintance on the theme, characters and set. To do this in steps, we worked on certain workshops, in which everyone had an explorative strategy (or more), involved. The first workshop involved the introduction of the theme. We were divided in groups and every group was provided a large paper, and we had a certain amount of time to write on the paper everything that love represented to us, to the society. Lots of different ideas came up, some that I had never thought about, for example, narcissism (Narcissus - a man who fell in love with his own reflection). ...read more.

After the whole class finished writing their thoughts, some improvisations were made on the set provided; usage of all props was required. After the improvisations were made the use of the third explorative strategy was put in. The class was divided in groups again to do some role plays. Role play is when an individual pretends to be someone else, characterizing this person and imagining what he thinks, says and acts. I worked with Julio and Leo on the play. We wished to show that love was not only between men and women, so we decided to show friends love. The play itself was consisted of many explorative strategies: role play, cross cutting, thought tracking and monologue and a narration in the end. Cross cutting was used especially in the past and the beginning to show passage of time. There were two monologues in the play to show the characters feelings (thought tracking) ...read more.

We wanted to show that death is always present in the life of a person, in any circumstances, and you have to cope with it. It was interesting to do this because we had never done it before, also it was to practice our physical skills and movement, and show that a play is not based only on the lines but also on the movements. We had a surprise because when it got to the time for us to present the poem was sung and we had to the same we rehearsed ignoring the music. And after doing it we found out it fit really well the play and we managed to finish on the exact time as the music. With the aid of the explorative strategies we were able to enhance our knowledge on every aspect involving the workshops, was it characters, space and plot. It is also helpful to create a better drama piece giving for entertainment for the audience, and interesting effects. ?? ?? ?? ?? Antonio Carlos Tostes - 9C Candidate Number: 0042 5/5/2007 Drama - IGCSE ...read more.