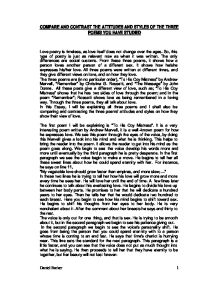 The three poems are (in no particular order), &quot;To His Coy Mistress&quot; by Andrew Marvell, &quot;Remember&quot; by Christina G. Rossetti, and &quot;The Message&quot; by John Donne. All these poets give a different view of love

COMPARE AND CONTRAST THE ATTITUDES AND STYLES OF THE THREE POEMS YOU HAVE STUDIED Love poetry is timeless, as love itself does not change over the ages. So, this type of poetry is just as relevant now as when it was written. The only differences are social customs. From these three poems, it shows how a person loves another person of a different sex. It shows how he/she expresses his/her love. All three poems were written at different times, and they give different views on love, and on how they love. The three poems are (in no particular order), "To His Coy Mistress" by Andrew Marvell, "Remember" by Christina G. Rossetti, and "The Message" by John Donne. All these poets give a different view of love, such as; "To His Coy Mistress" shows that he has two sides of love through the poem; and in the poem "Remember"; Rossetti shows love as being remembered in a loving way. Through the three poems, they all talk about love. In this Essay, I will be explaining all three poems and I shall also be comparing and contrasting the three poems' attitudes and styles on how they show their view of love. The first poem I will be explaining is "To His Coy Mistress". It is a very interesting poem written by Andrew Marvell, it is a well-known poem for how he expresses love. ...read more.

This is another reason that there are two people arguing, by the voice giving commands to another person. We get the idea that the voice is angry with his/her partner because he/she believes that his partner has had an affair behind the voice's back. "And false passions," The voice lies in the poem by saying that he loves her anyway although he doesn't: "Long have dwelt on thee:" As the poem goes along, the voice starts to get angrier, rising throughout the poem. At the beginning of the poem, he was just angry; but from that he wants his/her partner to suffer with his anger rising: "Yet send me back my hearts and eyes, that I may know, and see thy lies, And may laugh and joy, when thou Art in anguish And dost languish For some one That will none." This is meaning that he wants his partner to feel the pain that he felt when he found out about her having an affair. He wants her to suffer the way he did. The voice gives a negative tone of voice throughout the poem, this is what mainly stands out in the poem. In conclusion, the poem is about a negative and heart-broke man who wants revenge on his partner. The third poem I shall be explaining is the poem "Remember", which was written by Christina G. Rossetti. ...read more.

"To his Coy Mistress" and "Remember" are poems, which express their love in a positive way; but "The Message" expresses its love in a negative way. All of the three poems have a similarity of having rhyming pairs. These give passion and emotion to their words to give better imagery of the subject. The differences between the poems are that all three poems are set differently, "Remember" is just one paragraph which is how a sonnet is, "The Message" is set in two paragraphs, and "To his Coy Mistress" is set in three paragraphs which contains more lines than the other two poems. The tone of each poem is different, the tone in the poem "Remember" changes as if the tone was a paragraph. The tone of the poem "To his Coy Mistress" changes from a positive tone, to a negative tone", which makes the tone to be varied. Also the tone in the poem "The Message" starts off with a negative tone, but then rises into a fiercer and more negative tone. The poem "To his Coy Mistress" has rhyming pairs but do not have a halting line unlike to the poems "Remember" and "The Message". Also the structure of this poem has three sections/paragraphs. Whilst reading through these paragraphs, rage and anger starts to ascend, "To his Coy Mistress" has similar tone to an extract from the novel "The Colonel", which begins with a calm and tranquil tone, to an angry and horrific tone at the end of the extract. All three poems have similarities but also have some non-similarities. Daniel Barker 1 ...read more.