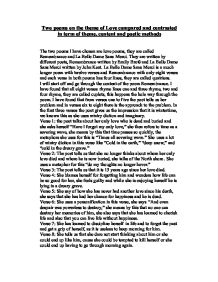 Two poems on the theme of Love compared and contrasted in term of theme, content and poetic methods The two poems I have chosen are love poems, they are called Remembrance and La Belle Dame Sans Merci. They are written by different poets, Remembrance written by Emily Brot� and La Belle Dame Sans Merci written by John Keat. La Belle Dame Sans Merci is a much longer poem with twelve verses and Remembrance with only eight verses and each verse in both poems has four lines, they are called quatriens. I will start off and go through the content of the poem Remembrance. I have found that all eight verses rhyme lines one and three rhyme, two and four rhyme, they are called cuplets, this happens the hole way through the poem. I have found that from verses one to five the poet tells us her problem and in verses six to eight there is the approach to the problem. In the first three verses the poet gives us the impression that it is wintertime, we known this as she uses wintry diction and imaginary. ...read more.

Verse 7: He tells him how she found him relish sweet (herbs) to eat and manna dew to drink and he says of how she said to him "I love thee true," this shows that they were in love. Verse 8: She took him back to her elfin grot (fairy cave), were he kissed her all over, which indicates they had sex again. Verse 9: The knight say of how she lulled him to sleep and he had a dream, he say it was his lasted dream on the cold hills, and my impression is that this may have happen before between them. Verse 10: In his dream he saw pale kings and princes, dead warriors that cried La Belle Dame Sans Merci, which means the beautiful lady without pity, we are led to believe these people are in captivity. Verse 11: The warrior says of how he saw the people starved lips in the light, he says this was a warning to him. He says he woke and he was on the cold hillside. Verse 12: The knight then tells the questioner why he is standing alone walking about, and talking about the autumn. The interpretation of this poem is about love, he means it doesn't last and when it is over you are left lonely. ...read more.