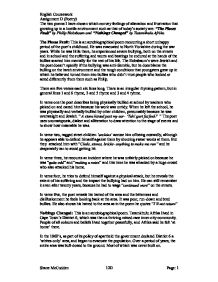 The two poems I have chosen which convey feelings of alienation and frustration that growing up in a hostile environment such as that of today's society are: &quot;The Places Fault&quot; by Philip Hobsbaum and &quot;Nothings Changed&quot; by Tatamkhula Afrika.

The two poems I have chosen which convey feelings of alienation and frustration that growing up in a hostile environment such as that of today's society are: "The Places Fault" by Philip Hobsbaum and "Nothings Changed" by Tatamkhula Afrika. The Places Fault: This is an autobiographical poem recounting a short unhappy period of the poet's childhood. He was evacuated to North Yorkshire during the war years. While he was little there, he experienced severe bullying, both on the streets and in school and the suffering and taunts and beatings he endured at the hands of the bullies scarred him mentally for the rest of his life. The Hobsbaum's were Jewish and the poet doesn't specify if the bullying was anti-Semitic, but he does blame the bulling on the harsh environment and the tough conditions that youngsters grew up in which he believed turned them into bullies who didn't trust people who looked or acted differently from them such as Philip. There are five verses each six lines long. There is an irregular rhyming pattern, but in general lines 1 and 6 rhyme, 2 and 5 rhyme and 3 and 4 ryhme. ...read more.

He can still remember it even after twenty years, because he had to wage "continued wars" on the streets. In verse five, the poet reveals his hatred of the area and the bitterness and disillusionment he feels looking back at the area. It was poor, run-down and bred bullies. He also shows his hatred to the area as in the poem he quotes "I'll not return" Nothings Changed: This is an autobiographical poem. Tatamkhulu Afrika lived in Cape Town's District 6, which was then a thriving mixed-race inner-city community. People of all colours and beliefs lived together peacefully, and Afrika said he felt 'at home' there. In the 1960's, as part of its policy of apartheid the government declared District 6 a 'whites-only' area, and began to evacuate the population. Over a period of years, the entire area was bull-dozed to the ground. Most of which was never built on. The poem was written just after the official end of apartheid. It was a time of hope- Nelson Madela had recently been released from prison, and the ANC was about to form the government of South Africa.. ...read more.

Repetition reinforces the sense of his anger throughout the poem. Language: The whole poem is written in the present tense. Although he is reliving a past experience. The poet seems to be re-living the experience as he writes. This makes the poem very vivid to read. The viewpoint in the poem is very easily sent out. We can imagine how his hands 'bukn' to take revenge. The contrasting images of the wasteland and the expensive restaurant existing down the road from the working man's caf� sharply contrasted are the inequalities that the poet observes. Similarities in both poems: * Both are autobiographical poems. * Both deal with a specific place, which has unhappy memories for poet. * Both places were unattractive. * Both poets feel outsiders. * Both poets still have strong feelings of anger and bitterness against the area. * Both poets see the inequalities 'outsiders' face. I preferred The Places Fault as it was a lot more descriptive and I could get a better idea of the situation. The language was also a lot easier to understand the context of the story seemed to be a lot more vivid. ?? ?? ?? ?? English Coursework Assignment D (Poetry) Shane McCudden 12D Page: 1 ...read more.