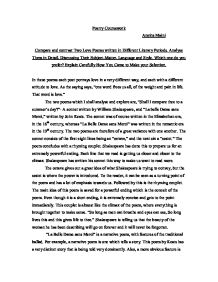 The two poems which I shall analyse and explore are, &quot;Shall I compare thee to a summer's day?&quot;- A sonnet written by William Shakespeare, and &quot;La belle Dame sans Merci,&quot; written by John Keats.

Poetry Coursework Amrita Maini Compare and contrast Two Love Poems written in Different Literary Periods. Analyse Them in Detail, Discussing Their Subject-Matter, Language and Style. Which one do you prefer? Explain Carefully How You Came to Make your Selection. In these poems each poet portrays love in a very different way, and each with a different attitude to love. As the saying says, "one word frees us all, of the weight and pain in life. That word is love." The two poems which I shall analyse and explore are, "Shall I compare thee to a summer's day?"- A sonnet written by William Shakespeare, and "La belle Dame sans Merci," written by John Keats. The sonnet was of course written in the Elizabethan era, in the 16th century, whereas "La Belle Dame sans Merci" was written in the romantic era in the 19th century. The two poems are therefore of a great variance with one another. The sonnet consists of the first eight lines being an "octave," and the next six a "sestet." The poem concludes with a rhyming couplet. Shakespeare has done this to prepare us for an extremely powerful ending. Each line that we read is getting us closer and closer to the climax. Shakespeare has written his sonnet this way to make us want to read more. The octave gives out a great idea of what Shakespeare is trying to convey, but the sestet is where the power is introduced. To the reader, it can be seen as a turning point of the poem and has a lot of emphasis towards us. Followed by this is the rhyming couplet. The main idea of this poem is saved for a powerful ending which is the conceit of the poem. Even though it is a short ending, it is extremely concise and gets to the point immediately. This couplet is almost like the climax of the poem, where everything is brought together to make sense. ...read more.

The repetition on the word "more" is highly emphasised as it reinforces the idea of the poem, which is the beauty that this woman posses. Also the alliteration on the consonant "l" gives it a long, dreary feel which slows the poem down. The overall mood of each poem is, therefore, extremely different as are the atmospheres. In "Shall I compare thee to a summer's day?" the mood of the poem is much happier and reflects the gaiety felt by the lover. However, in "La Belle Dame sans Merci," the mood is depressing and one of pain and anguish. As the ballad is telling a story, it too describes the happiness the knight once felt, when he was under the pretence that this beautiful woman loved him. Therefore in this sense, the poems are quite similar as they both describe a sense of completeness and happiness when one feels loved. However, the difference is that the love in one poem is true love, and in the other, it is false. In "Shall I compare thee to a summer's day?" there is one main character who Shakespeare describes, the beautiful heroine, whose perfections through the poet's eyes appear to be infinite and everlasting. Shakespeare says, "But thy eternal summer shall not fade." The "but" in this sentence suggests a turning point and change in the poem. Her beauty, unlike the summer is everlasting, unable to be destroyed by the wind. Her love is constant, and will never decline as the summer's beauty does. This is a positive love, as is shown by Shakespeare's adoration and continuous praise of her. Shakespeare decides that the summer is not a good enough compliment to use to woo his lady. During the sestet of "Shall I compare thee to a summer's day?" Shakespeare's language includes many monosyllabic words and does this in order to sound adamant and utterly convinced of his love, for example, "fade, shade, long, lives, gives." ...read more.

The last two lines are identical to the first two, and Keats uses this purposely for emphasis and effect. In conclusion, out of the sonnet and the ballad, I personally prefer Shakespeare's sonnet, as it portrays love as something positive, and something which brings happiness and joy. "La Belle Dame sans Merci" is however, more story-like and perhaps more interesting to listen to as it is intriguing, and has an air of mystery about it, due to it's Medieval background. It is also much easier to understand. However, I like the way in which Shakespeare uses many comparisons and flatteries in order to woo his lady. Another feature that I liked about Shakespeare's sonnet was the length. A lot of significant information is given out in such a short poem. It is filled with meaning, which has been hugely added by the use of metaphors. One thing in particular I enjoyed about the sonnet was the use of metaphors, because it makes the sonnet seem much more real. The comparisons brought this special woman to life. Also, the positive ness of this poem is what attracted me more to it than to "La Belle Dame Sans Merci," because Shakespeare leaves you with much cheerfulness to go away with. Although, I enjoyed studying the short jerky stanzas of Keats' "La Belle Dame Sans Merci." It set a different mood to that of Shakespeare's sonnet with a much more miserable ending. The features I liked about this poem were the repetition of consonants and phrases. This had a great impact on me because it was almost like an echo being heard. This added to the eeriness of the poem. We therefore see how love has two paths. One leads us to be hurt, whereby we suffer from heartache and rejection. The other is passionate, and true, and each poem presents one of these types of love. The poems represent how there is a fine line between love and infatuation, and the reader should be careful that the love the find is true. ...read more.