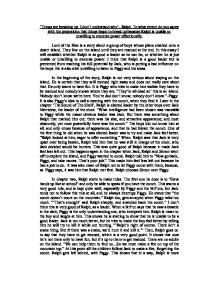 'Things are breaking up - I don't understand why'-Ralph - To what extent do you agree with the preposition that things begin to break up because Ralph is unable or unwilling to exercise power effectionally.

'Things are breaking up. I don't understand why'- Ralph. To what extent do you agree with the preposition that things begin to break up because Ralph is unable or unwilling to exercise power effectionally. Lord of the flies is a story about a group of boys whose plane crashed onto a desert island. They live on the island until they are rescued at the end. In this essay I will establish whether Ralph is as good a leader as he can be, or whether he is just unable or unwilling to exercise power. I think that Ralph is a good leader but is prevented from reaching his full potential by Jack, who is putting a bad influence on the boys. He is also a bit unwilling to listen to Piggy and his ideas. In the beginning of the story, Ralph is not very serious about staying on the island. He is certain that they will rescued right away and does not really care about that. He only wants to have fun. It is Piggy who tries to make him realize they have to be rescued and nobody knows where they are. "They're all dead an' this is an island. Nobody don't know we're here. You're dad don't know, nobody don't know."-Piggy. It is also Piggy's idea to call a meeting with the conch, when they find it. Later in the chapter 'The Sound of The Shell', Ralph is elected leader by the other boys over Jack Merridew, the leader of the choir. ...read more.

Jack is really starting to get obsessed with hunting, and can't see how anything could be more important. Ralph, however thinks rescue and being sheltered is more important. "I was talking about smoke! Don't you want to be rescued? All you talk about is pig, pig, pig!" I think that it is good that Ralph was elected leader because, as Piggy states, much later in the book if Jack was chief, they'd just hunt all the time and never get rescued. Ralph thinks it's unfair that Ralph can do something he likes and that he and Simon have to do evrything else. "'I work all day with nothing but Simon...' 'I was working too----' 'But you like it! You want to hunt. While I-----'" Chapter four, painted faces and long hair, starts with Roger being mean to the littl'uns, when Jack asks him to come and watch him paint his face.This symbolises the start of their evil friendship. Later in the chapter, Piggy is talking to Ralph about making a sundial. Ralph does not understand and makes fun of him, by saying 'and an airplane, and a TV set...' Piggy is having a good idea but Ralph is not willing to listen. He thinks Piggy is a bore, but, at the end, doesn't know what to do and wants Piggy's help. Ralph enjoys joking with Piggy and making him look stupid. ...read more.

Ralph tells Jack to let Piggy speak but Jack gets angry: "And you shut up! Who are you anyway? Sitting there, telling people what to do. You can't hunt, you can't sing-." "I'm chief. I was chosen." Here, Jack is saying that he should be chief. Piggy, and others are against this idea, but a couple of boys agree with Jack. He is becoming more and more overpowering, so much that Ralph says "I ought to give up being chief." Piggy quickly pushes that idea aside. The assembly falls apart and the hunters sing and dance again. All in all, I think that Ralph becomes a better chief as the story goes on. At first he didn't really do anything and was only there to have fun. He didn't listen to Piggy, but only thought about himself. I think he was unable of being a good chief because of Jack, who brought him down and made him feel bad, almost to give up being chief. He got obsessed with fire, whilst Jack got obsessed with hunting. I think it is much better to think about rescue than meat. "If Jack was chief he'd have all hunting and no fire. We'd be there till we died."-Piggy. I think this is a very important quote which shows why Ralph is a good chief. It is not really his fault that things start to break up. It is because of Jack and his hunters not doing what they have to do, like when the fire burnt out because of them. ...read more.