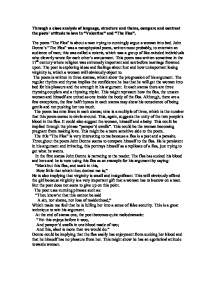 Through a close analysis of language, structure and theme, compare and contrast the poets' attitude to love in

Through a close analysis of language, structure and theme, compare and contrast the poets' attitude to love in "Valentine" and "The Flea". The poem "The Flea" is about a man trying to cunningly argue a woman into bed. John Donne's "The Flea" was a metaphysical poem, written most probably, to entertain an audience of men; this was called a coterie, which was a group of like-minded individuals who cleverly wrote for each other's amusement. This poem was written sometime in the 17th century where religion was extremely important and sex before marriage frowned upon. The poet is exploring ideas and feelings about lust and how unimportant losing virginity is, which a woman will obviously object to. The poem is written in three stanzas, which show the progression of his argument. The regular rhythm and rhyme implies the confidence he has that he will get the woman into bed for his pleasure and the strength in his argument. In each stanza there are three rhyming couplets and a rhyming triplet. This might represent how the flea, the unseen woman and himself are united as one inside the body of the flea. Although, there are a few exceptions, the few half rhymes in each stanza may show his conscience of being gentle and not pushing her too much. ...read more.

He agrees with her and then uses what she has said and twists it to say, 'It is only a flea. And it is only sex.' In the last few line of the 3rd stanza Donne has pushed her into a corner and his argument is won. The use of the flea in this poem is a conceit; John Donne kept coming back to the flea in his argument as a way of pushing his point. This is similar to Carol Ann Duffy's poem "Valentine" where she has used an onion as a conceit, as a way of representing her feelings and attitudes towards love. Carol Ann Duffy is a modern day poet and wrote "Valentine" in the 20th century. The poem is about giving something different to the one you love on Valentines Day. She is exploring feelings about love and how to express them. The tone throughout the poem is truthful, sincere and sometimes shy: "I am trying to be truthful", which is different to John Donne's "The Flea" because his tone is confident and arrogant: "When thou yield'st to me". The title "Valentine" immediately makes you think of soppy cards and romantic gestures that people give to their partners, this is due to the materialistic world that we live in and the hype that the media and advertising companies create. ...read more.

Both poems show different attitudes towards love and their confidence in expressing themselves. I can relate to "Valentine" because Duffy expresses her ambiguity about love; it is neither good nor bad. I agree with this statement, I think that this is what Duffy is trying to put across throughout her poem. Maybe that Valentines Day is just a clich�; that deeper feeling's needed to be expressed. The most powerful line for me was "I give you an onion." It interested me because it was so absurd and incongruous and made me wonder why she had chosen an onion to represent her affection felt for her partner. I think the poet felt strongly about how people should express their feelings to those you care about instead of following the crowd and sending pointless cards. I would like to read more of her poems. John Donne's poem "The Flea" makes me feel quite angry because he has portrayed how some men think that women are objects; only for their own pleasure and that virginity is insignificant and unimportant. But it did also make me laugh because of how melodramatic he was and how desperate he was to persuade her that he used a flea as an example. I think it was a very clever poem and would have certainly entertained the audience it was aimed at. He was a very intelligent man and I would expect that many of his other poems would be just as witty and interesting. ...read more.