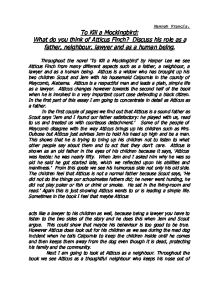 To Kill a Mockingbird:What do you think of Atticus Finch? Discuss his role as a father, neighbour, lawyer and as a human being.

Hannah Francis. To Kill a Mockingbird: What do you think of Atticus Finch? Discuss his role as a father, neighbour, lawyer and as a human being. Throughout the novel 'To Kill a Mockingbird' by Harper Lee we see Atticus Finch from many different aspects such as a father, a neighbour, a lawyer and as a human being. Atticus is a widow who has brought up his two children Scout and Jem with his housemaid Calpurnia in the county of Maycomb, Alabama. Atticus is a respectful man and leads a plain, simple life as a lawyer. Atticus changes however towards the second half of the book when he is involved in a very important court case defending a black citizen. In the first part of this essay I am going to concentrate in detail as Atticus as a father. In the first couple of pages we find out that Atticus is a sound father as Scout says 'Jem and I found our father satisfactory: he played with us, read to us and treated us with courteous detachment.' ...read more.

Next I am going to look at Atticus as a neighbour. Throughout the book we see Atticus as a thoughtful neighbour who keeps his nose out of their business, not minding if they keep out of his. We see this when his children were very curious about particular house in their street. ' Atticus never talked much about the Radleys: when Jem would question him Atticus's only answer was for him to mind his own business and let the Radleys mind theirs, they had a right to;' also 'putting his life's history on display for the edification of the neighbourhood.' Atticus does not think it fair for his children to tease Boo Radley in front of all their neighbours. Atticus Finch takes care of the whole of the community as well as just his family, as I have already mentioned earlier on in this essay during the mad dog incident. You can see this when Heck Tate tells Atticus to shoot the dog even though he hasn't used a gun in years. ...read more.

This shows that Mayella's conditions could not have been that bad. Next I am going to write about Atticus as a human being. 'For several years thereafter he invested his earnings in his brothers education.' This shows that Atticus is willing to sacrifice his money to his brother not only his children. Atticus treats everyone with the same respect. When the book was set there was a lot of racism in America, but he did not care what anyone thought and had a black housemaid. If white people had black people working for them, they normally treated them with disrespect but 'Calpurnia always won, mainly because Atticus always took her side.' Atticus stuck up for Calpurnia even between his children. Atticus tries to look after his neighbourhood as we see in the mad dog incident. 'Atticus's hand yanked a ball-tipped lever as he brought the gun to his shoulder.' He had not used a gun for many years and did not intend to use one in front of his children, but to protect his children and the society he did so. All in all Atticus is a good person. He has his enemies throughout the book and he has his friends. ...read more.