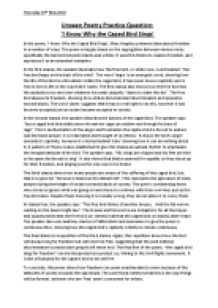 Transfer-Encoding: chunked ﻿Thursday 19th May 2016 Unseen Poetry Practice Question: ?I Know Why the Caged Bird Sings? In the poem, ?I Know Why the Caged Bird Sings?, Mary Angelou presents ideas about freedom in a number of ways. The poem is largely based on the segregation between various races, specifically the barriers between blacks and whites. It uses this theme to explore freedom, and expresses it as an extended metaphor. In the first stanza, the speaker illustrates how the free bird, or white race, is untroubled: ?the free bird leaps on the back of the wind?. The word ?leaps? is an energetic word, showing how the life of this bird is untroubled. ...read more.

Just like black people, it is mistreated and thought of as inferior. It shows the bird?s anger towards its captivity, however it is locked behind ?bars? showing how it can do nothing about it. A pattern of rhyme is also established to give this stanza an upbeat rhythm to emphasize the enraged attitude of the bird. The speaker says, ?His wings are clipped and his feet are tied so he opens his throat to sing?. It also shows that blacks yearned for equality so they stood up for their freedom, and singing was the only way to be heard. The third stanza shows how many people are aware of the suffering of the caged bird, but that it is ignored: ?his tune is heard on the distant hill?. ...read more.

The final stanza is a repetition of the third stanza. Again, this repetition shows how the bird will always long for freedom but will never be free, suggesting that the poet believes discrimination towards black people will never end. The final line of the poem, ?the caged bird sings for freedom? can be interpreted as a protest cry, linking to the Civil Rights movement. It is like a final plea for the captive bird to be set free. To conclude, this poem shows how freedom can seem unachievable to some because of the attitudes of society towards the oppressed. The poet firmly believes that this is the way things will be forever, as those who are ?free? aren?t concerned for others. ...read more.