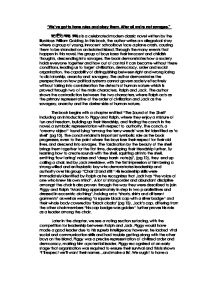 We've got to have rules and obey them, afterall we're not savages

"We've got to have rules and obey them. After all we're not savages." Lord of the flies is a celebrated modern classic novel written by the illustrious William Golding. In this book, the author writes an allegorical story where a group of young, innocent schoolboys face a plane crash, causing them to be stranded on an isolated island. Through the many events that happen in this novel, the group of boys loses their innocent and childish thoughts, descending into savages. The book demonstrates how a society holds everyone together and how out of control it can become without these conditions, leading us to forget civilization, democracy, order and social organization, the capability of distinguishing between right and wrong losing to dictatorship, anarchy and savagery. The author demonstrates the perspectives on how political systems cannot govern society effectively without taking into consideration the defects of human nature which is proved through two of the main characters, Ralph and Jack. The author shows the contradiction between the two characters, where Ralph acts as the primary representative of the order of civilization and Jack as the savagery, anarchy and the darker side of human nature. The book begins with a chapter entitled "The Sound of the Shell" including an introduction to Piggy and Ralph, where they enjoy ...read more.

If you're scared of someone you hate him but you can't stop thinking about him. You kid yourself he's all right really, an' when you see him again, it's like asthma an' you can't breathe."Jack's physical appearance is described as "Inside the floating cloak he was tall, thin and bony; his hair was red beneath the black cap. His face was crumpled and freckled and ugly without silliness". (pg 19) Ralph is depicted as the typical human being in the book, impure to both good and evil. As the protagonist in this novel, he represents the democratic aspects of government. He then becomes democratically elected as a leader of the group. When this happens, Jack becomes very angry, and we can tell that he is not used to being rejected the role of leader as seen "The freckles on Jack's face disappeared under a blush of mortification." The difference between Ralph and Jack is that Ralph always acted in everyone's best interests. As Ralph sees Jack's dismay, he immediately offers Jack a role and gives power to Jack "The choir belongs to you, of course". (pg19) Ralph does this to ensure peace, and prevent unnecessary conflicts. ...read more.

From this we are able to see Jack's impatient and rude behavior. Later on in the chapter, the boys, led by Jack go on a trip to light a fire, so as to allow rescuers to spot them, if they were to pass by. During this trip, Jack and Ralph realize that they were lacking matches to light the fire, as seen "The shameful knowledge grew in them and they did not know how to begin confession...Will you light the fire? Now the absurd situation was open, Jack lushed too. He began to mutter vaguely...He glanced at Ralph, who blurted out the last confession of incompetence. Has anyone got matches?" When Jack realizes that Piggy's glasses could be used as a tool to direct the sun and set up a fire in the mountain, he impolitely points at Piggy and says "His specs-use them as burning glasses!" and snatches the glasses from Piggy without asking for permission. This shows his mean and harsh treatment towards Piggy. He then teases Piggy later on, "A fat lot you tried... You just sat". From this, we can see Jack's selfishness and how he does not think about other's feelings before speaking. When Piggy indignantly states that he was holding the conch, and that he should been allowed to speak, Jack shuts him up an says "The conch doesn't count on top of the mountain. You shut up" ...read more.