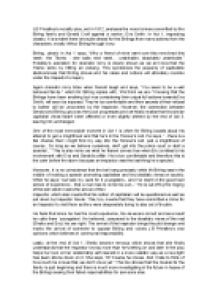 What clues in Act 1 tell you that there is trouble ahead for the Birling family?

Transfer-Encoding: chunked ﻿J.B Priestley's morality play, set in 1912, analyses the moral crimes committed by the Birling family and Gerald Croft against a worker, Eva Smith. In Act 1, inspecting closely, it is evident there is trouble ahead for the Birlings from many actions from the characters, mostly Arthur Birling through irony. Birling, clearly in Act 1 says, ?Why a friend of mine went over this new lined this week- the Titanic - she sails next week? unsinkable, absolutely unsinkable.? Priestley?s adoration for dramatic irony is clearly shown as we all know that the Titanic sinks by hitting an iceberg. This symbolizes the jeopardy of capitalistic stubbornness that Birling shows and his ideas and notions will ultimately crumble under the Inspector?s inquiry. ...read more.

just a knighthood of course.. So long as we behave ourselves, don't get into the police court or start a scandal...? This is also ironic as what he feared comes true when Eric confess to his involvement with Eva and Gerald?s affair. He is too comfortable and therefore this is the calm before the storm because an inspector was the last thing he expected. Moreover, it is no coincidence that the bell rang precisely while Mr Birling was in the middle of making a speech promoting capitalism and his idealistic views on society. While he says,? but take my word for it youngsters - and I've learnt in the good hard school of experience - that a man has to mind his own - ? He is cut off by the ringing of the bell which marks ...read more.

and later in the play helps her look at her relationship with Gerald in a more realistic way as a new light has been shone down on it. She says, ?Of Course he knows. And I hate to think of how much he knows that we don't know yet.? This too shows that the trouble for the family is just beginning and there is much more investigating in the future in hopes of the Birlings seeing their failed responsibilities for someone else. In conclusion, the trouble for the Birlings have just started in Act one and will further progress through the play until the very end where we are met with a shocking twist in the plot but there are many examples of trouble in Act 1 using irony which illustrates how their comfort will be shattered. ...read more.