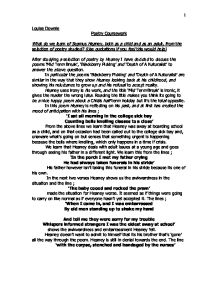 What do we learn of Seamus Heaney, both as a child and as an adult, from the selection of poetry studied? (Use quotations if you feel this would help)

Louise Downie Poetry Coursework What do we learn of Seamus Heaney, both as a child and as an adult, from the selection of poetry studied? (Use quotations if you feel this would help) After studying a selection of poetry by Heaney I have decided to discuss the poems 'Mid Term Break', 'Blackberry Picking' and 'Death of A Naturalist' to answer the above question. In particular the poems 'Blackberry Picking' and 'Death of A Naturalist' are similar in the way that they show Heaney looking back at his childhood, and showing his reluctance to grow up and his refusal to accept reality. Heaney uses irony is his work, and the title 'Mid Term Break' is ironic, it gives the reader the wrong idea. Reading the title makes you think its going to be a nice happy poem about a Childs half term holiday but it's the total opposite. In this poem Heaney is reflecting on his past, and at first has created the mood of anticipation with his lines ; 'I sat all morning in the college sick bay Counting bells knelling classes to a close' From the above lines we learn that Heaney was away at boarding school as a child, and on that occasion had been called out to the college sick bay and, unaware what's going on but senses that something urgent is happening because the bells where knelling, which only happens in a time if crisis. ...read more.

Here we learn that like most other children Heaney enjoyed the summer. We know this from the line ; 'Like thickened wine ; summer's blood was in it' Above Heaney is being tactile, 'imagining' what wine tastes like, and giving us another clue he's a child, because he hasn't tasted any wine. The lines ; 'Sent us out with milk cans, pea cans, jam pots Where briars scratched and wet grass bleached our boots Round hayfields, cornfields, and potato drills' tell us that Heaney was on a farm, and natural that children were picking up anything empty to put blackberries in. Heaney is tactile in the way he makes the reader feel the wounds the children have, the lines ; 'Like a plate of eyes. Our hands were peppered With thorn pricks, our palms sticky as Bluebeards' show this. The above lines suggest how many Blackberries the children have picked and the word 'Bluebeard's' suggests steeling, Bluebeard's being a Pirate. The words 'Like a plate of eyes' is the use of simile here, almost like the berries are looking up at him accusingly because they've taken too many. Throughout the rest of the poem Heaney's mood has changed to be very negative. We now move to the farm where the children ; 'Hoarded the fresh berries in the byre' which suggests that the children have taken far too much than they need and are trying to hide it away. ...read more.

Heaney is using lots of unpleasant imagery at the moment and is starting to see nature differently now. In line 26-27 towards the end of the poem Heaney feels as if the frogs are about to attack. He says ; Right down the dam gross bellied frogs were cocked On sods, their loose necks pulsed like snails, some hopped'. Heaney uses a nightmarish simile within the line ; 'Poised like mud grenades, their blunt heads farting I sickened, turned and ran. The great slime kings' and he says that nature has changed, as if it was a threat waiting to happen. He refers to the frogs as kings above, he imagined all the frogs attacking him because he's taken all the frogspawn. His outlook has changed, he's developed a very different perspective. In the first part of the poem Heaney was all innocent and in the second part of the poem Heaney has grown up. As a child he saw things as nice and simple As he grew up he became much more cynical and his response was to run away, has developed a different viewpoint on life. Has left his boyhood and realism in the past but he doesn't want to grow up. In conclusion I have learnt many things about Seamus Heaney as a child and as an adult. From the poems we learn of Heaney's reluctance to want to grow up, his refusal to accept reality and leave his boyhood behind. I think I was successful in my analysis of the poems. ?? ?? ?? ?? 1 ...read more.