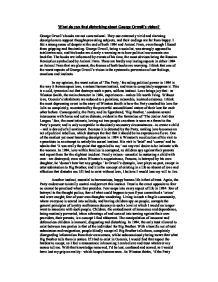 What do you find disturbing about George Orwell's vision?

What do you find disturbing about George Orwell's vision? George Orwell's books are not conventional. They use extremely vivid and alarming descriptions to support thought-provoking subjects, and their endings are far from happy. I felt a strong sense of despair at the end of both 1984 and Animal Farm, even though I found them gripping and fascinating. George Orwell, being a socialist, was strongly opposed to totalitarian rule, and his books are clearly a warning as to how political movements can backfire. The books are influenced by events of his time, the most obvious being the Russian Revolution symbolised by Animal Farm. There are hardly any lasting aspects in either 1984 or Animal Farm that are pleasant; the themes of both books are worrying. I think that one of the worst aspects of George Orwell's vision is the systematic perversion of our feelings, emotions and instincts. In my opinion, the worst action of 'The Party,' the ruling political power in 1984 is the way it frowns upon love, a natural human instinct, and tries to completely suppress it. This is a cold, tyrannical act that destroys such a pure, selfless instinct. Love brings joy that - as Winston Smith, the main character in 1984, experiences - makes life worth living. ...read more.

Living in such a fragile community, where everyone is scared into solitude, and having children spy on people, corrupts the general principles of loyalty and human decency to such a level at which I would no longer want to associate with such people. Children, the embodiment of innocence and dependence, being routinely perverted, taken advantage of and coaxed into turning against their own providers, their parents, is a concept I find abhorrent. The manipulation of innocent and defenceless children is immoral, disgusting and disturbing. In 1984, the only trust allowed to exist between two parties is that of the individual for Big Brother. With a horrific act of total submission and resignation, people blindly accept all Big Brother tells them, completely disregarding information from their own senses, whilst subconsciously being aware that what Big Brother tells them is untrue. If I had to exist in Oceania, I would find that aspect the hardest to accept, as I feel a reassurance in knowing I can believe and trust whatever my senses tell me. With that knowledge removed, I'd be lost, confused and scared, as I would have lost my grip on reality - which keeps humans sane. As Winston thinks, 'if the Party could thrust its hand into the past and say of this or that event that it never happened- that, surely, was more terrifying than mere torture or death'. ...read more.

In the middle of 'Hate Week,' the enemy changes, but the proceedings continue without the blink of an eye. It scares and disgusts me that Orwell can see such a strong emotion directed at a target, regardless of why the target is hated. Winston realises that 'the fear, the hatred and the lunatic credulity which the Party needs in its members can only be kept at the right pitch by bottling down some powerful instinct and using it as a driving force.' The Party has twisted and corrupted natural instincts to benefit themselves. In my opinion, the manipulation of human emotions, instincts and feelings is the most dishonest, corrupt way of gaining power. It is chilling to imagine the uncompromising, omnipresent, omnipotent power that would be required to enable such an atrocity. I would find it so hard never to be able to feel and love, and I would see no point in existing if I could not. Without our feelings we are no more than machines. The mere contemplation of having to exist without joyful emotions fills me with despair. I would truly prefer to die than to live intoxicated with misery and depression, without hope for a better life. I share Winston's sense of helplessness and injustice when O'Brien tells him 'If you want a picture of the future, imagine a boot stamping on a human face - forever.' Word Count: 1343 By Laura Parker ...read more.

This is one of the rare Literature questions that does not simply ask for a comparison - it asks for a personal viewpoint from the candidate, and in this question it directly references how George Orwell's staunchly dystopian fantasy stories ...

This is one of the rare Literature questions that does not simply ask for a comparison - it asks for a personal viewpoint from the candidate, and in this question it directly references how George Orwell's staunchly dystopian fantasy stories disturb the reader. Throughout this response, there is an impeccable magnetism towards the focus of the question, with an exceptional range of reasons to feel disturbed at Orwell's novels. The candidate has identified how the books present themes that would, to any human, be extremely distressing and disturbing but also takes the time to appreciate how they, as an individual, would feel if living under the totalitarian rule that features so prominently in 'Nineteen Eighty-Four' and 'Animal Farm'. Best of all, is the way they consistently return to the main steer of the question - how it makes them feel. This essay question goes a step beyond analysis, and not once does it feel like the personal responses to the texts and what the candidate discusses in their answer sticks out or feels shoe-horned in - this is often a problem for lower-ability candidates who might reuse adjectives for their own emotions or simply use a words sourced from the question, but this candidate uses a variety of words similar in definition to "disturbed" which also shows their written adeptness and wide vocabulary. Everything is woven brilliantly to produce a fantastic piece of coursework with a crystal-clear understanding of the question.

This essay's Level of Analysis is simply sublime. It is a joy to read because it covers, in great detail and to no excessive length, almost every single aspect required for a top band answer to the proposed question. While many students are capable of identifying elements of a disturbing nature to Orwell's style, candidates at GCSE hardly ever show a fully-fledged, well-rounded, well-researched contextual understanding of the novels - the social and historical factors that influenced the author's intentions for writing the books - but this candidate has done extremely well to mention the paralleled happenings of the Russian Revolution, Stalin and the oppressive government he ran when analysing 'Animal Farm' and how the themes Orwell explores not only disturbs the candidate, but also scares them, providing an excellently-sourced quotation each time. Insight and further elaboration of their points are abundant, all of which are valid: points such as the recognition of the removal of basic human instincts like love and trust in 'Nineteen Eighty-Four' are just wonderful, and the way in which the candidate stresses the importance of these instincts and WHY it would be disturbing to completely ban them only strengthens their answer exponentially, because they take the novel 'off the page' and analyse it's effect on them by putting themselves in the situation the characters are in. This level of analysis is required for all students aiming for the top marks - of which this candidate deftly achieves. An appreciation and understanding of the novel's themes when lifted out of the book - a personal response by imagining actually living within the constricts of totalitarian rule is imperative for students wishing to achieve the top grades.

Perhaps there is a bias towards the analysis to 'Nineteen Eighty-Four' over 'Animal Farm', with only one full paragraph being dedicated to the latter, but the personal responses the candidates expressed so expertly bridge these gaps. This is an excellent practice because it means that candidates able to write like this can write an essay that does not just deal with one point after the next - the assess the effect of the novel holistically and therefore link back to earlier points made, and this is effective because it helps the reader comprehend and retain the information the candidate is giving.

The Quality of Written Communication here is flawless. There is a wide range of punctuation points, including the dastardly semi-colon and a correct use of parentheses (--, (), []), and all are used by a candidate who, on numerous occasions throughout the essay, show they can use each with confidence and flair. This essay is the model response for future candidates studying these texts.