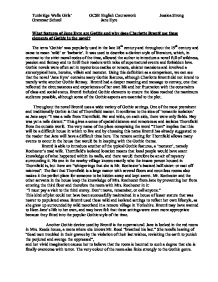 What features of Jane Eyre are Gothic and why does Charlotte Bront use these elements of Gothic in the novel?

What features of Jane Eyre are Gothic and why does Charlotte Bront� use these elements of Gothic in the novel? The term 'Gothic' was popularly used in the late 18th century and throughout the 19th century and came to mean 'wild' or 'barbaric'. It was used to describe a distinct style of literature, which, in contrast to the strict moral codes of the time, allowed the author to introduce a novel full of wildness, passion and fantasy and to thrill their readers with tales of supernatural events and forbidden love. Gothic novels were often set in mysterious castles or remote, sinister mansions and involved a stereotypical hero, heroine, villain and monster. Using this definition as a comparison, we can see that the novel 'Jane Eyre' contains many Gothic features, although Charlotte Bront� did not intend to merely write another Gothic fantasy. Bront� had a deeper meaning and message to convey, one that reflected the circumstances and experiences of her own life and her frustration with the constraints of class and social status. Bront� included Gothic elements to ensure the ideas reached the maximum audience possible, although some of the Gothic aspects are essential to the plot. Throughout the novel Bront� uses a wide variety of Gothic settings. One of the most prominent and traditionally Gothic is that of Thornfield manor. It conforms to the idea of 'romantic isolation' as Jane says: "I was a mile from Thornfield. Far and wide, on each side, there were only fields. Hay was yet a mile distant." This gives a sense of spatial distance and remoteness and isolates Thornfield from the outside world. ...read more.

This links to the Gothic idea of 'romantic isolation' not only in settings, but in the situations of characters. Jane is separated from her family as she is an orphan; and separated from the Reed's by their detestation of her. She is also isolated by force on occasion as when she is locked in the red room and by the remoteness of Thornfield. One of the ideas typical of the Gothic heroine is essential to the plot of 'Jane Eyre'. This is that the heroine redeems a 'noble savage' with her love, and loves him powerfully and faithfully. There is a direct link between this idea and the manner of Jane and Rochester's relationship throughout the novel. Mr. Rochester is much more of a typical Gothic character than Jane although Bront� avoids some of the Gothic clich�'s by not making him conventionally handsome; "a dark face with stern features and a heavy brow." This allows Jane to feel confident in front of him and not so acutely conscious of her own shortcomings: "Had he been a handsome heroic-looking young gentleman, I should not have dared to stand thus questioning him against his will." Mr. Rochester is also portrayed as the antithesis of the protective Gothic hero as he falls off his horse and has to rely on Jane's aid, which undermines his masculinity: "you may help me yourself, if you would be so kind." This is also shown at the end of the novel, when Jane goes to Rochester after gaining a sum of five thousand pounds, to find that he is a blind cripple: "you are rich Jane, and must have friends who will look after you, and not suffer you to devote yourself to a blind lameter such as myself." ...read more.

Jane and Rochester had been sitting under this tree when they had agreed to marry, and thus the chestnut tree is used by Bront� to represent the impending rupture and decay of their relationship after this point. Through the use of many typically Gothic devices, such as 'romantic isolation' and pathetic fallacy and also her observation of the different roles that occur in Gothic novels, such as a heroine, hero, monster and villain; Charlotte Bront� has managed to successfully write a novel that on first impressions may appear to be entirely of the Gothic genre, but on closer inspection contains many irregularities and deviances from this ideal. Her two main and most prominent characters, the hero and heroine, are the best examples of this, as both are flawed, which is uncharacteristic of both the Gothic and Romantic genres with which 'Jane Eyre' is associated. Mr. Rochester is flawed in his unattractiveness, surly manner and undesirable marital situation; and Jane is also flawed in her physical undesirability; and by her outspoken and frank nature; which was not regarded as a good quality for a woman to have. However, with the inclusion of many Gothic themes that become an essential part of the plot, for example Thornfield's loneliness and the idea of Bertha being portrayed as a 'monster', Bront� managed to persuade readers that 'Jane Eyre' was in fact of the Gothic genre. In doing so she thus secured as wide an audience as possible to whom she could convey her controversial ideas and wishes through the character of Jane, who only finds peace within her life when she meets a man that sees her as an equal, and, by the end of the novel, even depends on her. Tunbridge Wells Girls' GCSE English Coursework Jessica Strong Grammar School Jane Eyre ...read more.