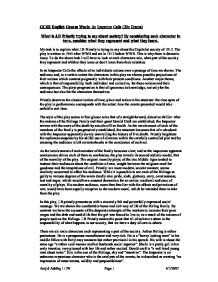 What is J.B Priestly trying to say about society? By considering each character in turn, consider what they represent and what they learn.

GCSE English Course Work: An Inspector Calls (20c Drama) What is J.B Priestly trying to say about society? By considering each character in turn, consider what they represent and what they learn. My task is to explain what J.B Priestly is trying to say about the Capitalist society of 1912. The play is written in 1945 after WWII and set in 1912 before WWII. This is why there is dramatic irony. To do the above task I will have to look at each characters role, what part of the society they represent and whither they learn or don't learn from their mistakes. In an Inspector Calls the effects of an individuals actions over a passage of time are shown. The audience and, to a certain extent the characters in this play are shown possible projections of their actions which contrast poignantly with their present conditions. Another major theme, which is that of responsibility, both individual and collective, for those actions and their consequences. The plays progression is that of ignorance to knowledge, not only for the audience but also for the characters themselves. Priestly observes the classical unites of time, place and action in his structure: the time span of the play in performance corresponds with the actual time the events presented would take unfold in real time. The style of the play seems at first glance to be that of a straightforward, detective thriller: after the natures of the Birlings Family and their guest Gerald Croft are established, the Inspector arrives with the news of the death by suicide of Eva Smith. ...read more.

That is why their children are left to deal with their own problems. They don't feel comfortable talking to their parents. Eric says this at the end of the play when his parents want a scapegoat and blame him for everything including their own misdeeds ignoring their own guilt. They tell him he should have come to his father when he was in trouble. Eric clearly tells Mr Birling what sort of father he is to his children "you're not the type of father a chap would come to when he is trouble". Mr Birling was looking for a knighthood, because of his service as a magistrate and a lord mayor. He expresses all this by talking to Gerald "so well I gather there's a good chance of a knighthood. So long as we behave ourselves, don't get into court". Now the audience are unaware of what Birling has done that could get him into court. Because of his civil service, Mr Birling thinks himself to know everything. The audience know he is wrong because he is talking about what the future holds (future as in the audience's time of the 1940s). The audience know what has happened. He predicts the Titanic is unsinkable; there will not be a war. Capital .v. Labour will be finished. He is wrong in each case. This is how Priestly creates dramatic irony. Mr Birling continuously tells every one of his social superior by contentiously mentioning himself being a "hard headed business man", which proves he is a show off. Sheila and Eric a still young and learning that's why they are easily changed by the Inspector. ...read more.

He also says "They just won't try to understand our position or to see the difference between a lot of stuff like this coming out in private and a down right public scandal". He also wants to laugh the matter off. He is laughing when he repeats the Inspectors phrase of you helped kill her. "You'll have a good laugh over it", he the says, "Look at the pair of them - the famous younger generation who knew it all. And they can't even take a joke". Eric and Sheila realise it doesn't matter if the Inspector was a fake or not. They think that they cannot start "pretending" again and they did what they confessed. The real thing that matters is not to repeat the past and help people like Eva Smith, reduce their problems. J.B. Priestly is trying to say that we cannot let the younger generations make the same mistake. Every one is represented in the play and everyone can learn. J.B. Priestly message is that "we are part of one body caring for each other carrying responsibilities if one part is hurt then everyone suffers. We can't ignore our responsibilities. The Inspector is J.B. Priestly speaking to his audience. The Inspector comes in at a happy time, takes everyone into account and leaving making everyone feeling guilty but only changing Eric and Sheila. After his departure they realise he was a hoax. They calm down and pretend nothings happened but because this is a cycle and they could have hurt more than one Eva Smith, the audience are left guessing as another inspector visits them for the same reason. This suggests they are guilty for more than one crime. Amjid Ashfaq 11JW Page 1 5/1/2007 ...read more.