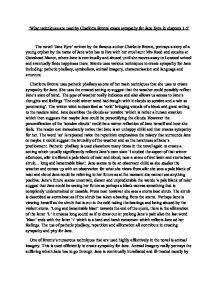 'What techniques are used by Charlotte Bronte create sympathy for Jane Eyre in chapters 1-5' The novel 'Jane Eyre' written by the famous author Charlotte Bronte, portrays a story of a young orphan by the name of Jane who has to live with her cruel aunt Mrs Reed and cousins at Gateshead Manor, where Jane is continually and abused until she moves away to Lowood school and eventually finds happiness there. Bronte uses various techniques to create sympathy for Jane including: pathetic phallacy, symbolism, animal imagery, characterisation and language and structure. Charlotte Bronte uses pathetic phallacy as one of her main techniques that she uses to create sympathy for Jane. She uses the created setting to suggest that the weather could possibly reflect Jane's state of mind. The type of weather really indicates and also allows us access to Jane's thoughts and feelings 'The cold winter wind had bought with it clouds so sombre and a rain so penetrating'. The winter wind is described as 'cold' bringing visuals of a bleak and great setting to the readers mind. Jane describes the clouds as 'sombre 'which is rather a human emotion which then suggests that maybe Jane could be personifying the clouds. However the personification of the 'sombre clouds' could be a mirror reflection of Jane herself and how she feels. ...read more.

Symbolism is one of Bronte's features that is used to bring out Jane's character and personality which then makes us feel sorry for her as Jane's nature and persona is not one which is accepted in the 19th century. The symbolism in the novel is used mainly to represent Jane's disposition. The allegory of the moon is exceptionally significant 'The cold and ghastly moon'. This is surprisingly momentous as in the 19th century the moon was seen as a symbol of madness. This greatly reflects Jane as Jane's personality and behaviour is considered reckless and irrational and also eccentric. Also the symbolism of the red room is very important the colour red has many connotations; anger Jane's anger towards the injustice of her treatment, hatred the hate that Jane feels for her extended family, fear the fear that Jane has of the red room and pain the pain the pain she feels from having no real family. The 'Red' is very major it is mentioned many times but in different forms 'deep red damask ... crimson cloth'. Deep red and crimson are both varieties of the colour red, damask is a type of expensive material it suggests that the red room has a certain grandeur about it with all the sumptuousness of the furniture 'A bed supported on massive pillars of mahogany' the room is obviously very important, however there is something about the room which Jane fears. ...read more.

She is the one person at Gateshead who is concerned about Jane. However the other maid Miss Abbott continually scolds Jane 'God will punish her: He might strike her dead' Miss Abbott has no sympathy of Jane and we really pity her as even the servants feel it is ok for them to mistreat Jane. Jane is the lowest of ranks; this really shows us the status of orphans. A new and also different friendship takes place once Jane moves away from Gateshead to Lowood School she forms a friendship with a girl named Helen Burns. This friendship starts when Jane approaches Helen questioning her about her book 'Is your book interesting?... a chord of sympathy somewhere for I too liked reading' Jane is finally having an actual conversation with someone about something they both have in common and enjoy. We feel sorry for as this is the first time Jane is actually conversing with someone outside of Gateshead. This makes us fee sorry her. The features used in the novel such as symbolism, pathetic phallacy, animal imagery, characterisation and language and structure are all used to create sympathy for Jane. The social, historical and moral context is integrated into the novel to create some understanding for the treatment of particular citizens. Which creates pity for those treated badly mainly Jane. ...read more.