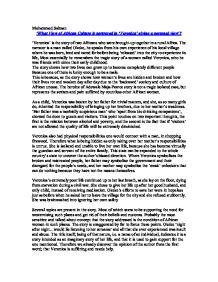 What View of African Culture is portrayed in Veronica(TM) giving a personal view(TM)?

Mohammed Salman 'What View of African Culture is portrayed in 'Veronica' giving a personal view'? 'Veronica' is the story of two Africans who were brought-up together in a rural Africa. The narrator is a man called Okeke, he speaks from his own experience of his local village where he was born, bred and cared for before being 'released' into the city to experience its life, Most essentially he remembers the tragic story of a women called Veronica, who he was friends with since their early childhood. The story shows how two lives can grow up to become completely different people Because one of them is lucky enough to be a male. This is because, as the story shows how women's lives are hidden and broken and how their lives rot and weaken day after day due to the 'backward' society and culture of African unease. The heroine of Adewale Maja-Pearce story is not a tragic isolated case, but represents the sexism and pain suffered by countless other African women. As a child, Veronica was beaten by her father for trivial matters, and she, as so many girls do, inherited the responsibility of bringing up her brothers, due to her mother's weakness. 'Her father was a morbidly suspicious man' who 'apart from his drinking companions', showed the door to guests and visitors. ...read more.

if Veronica chose to take it she would have lived, but she refused it rudely and remained in her 'backward' and 'diverse' culture, therefore she suffered the consequences and died. It is Veronica who was treated awfully, and even when she grew to a woman 'apart from the beating nothing had really altered'. She had no freedom whatsoever and her future seemed programmed by her father. She was enslaved to serve and carry out tasks and was expected to keep silent in the face of all this suffering. Okeke on the other hand was respected as a child and had no physical responsibilities. He completed his education up to university level and became a doctor, with all the trappings of that lifestyle. How better can life get? It's all due to Westernisation; this is what Maja-Pearce is trying to say. Another well-masked theme is breaking the family link. Veronica refused to leave her family because 'they are her family that is enough'. Therefore she suffered the Consequences. However, Okeke did leave his family to further his education and prospered. Moreover, when she was nearing her death she refused to 'leave' her husband and child's memory although they were dead. The author by showing Veronica as stubborn in refusing to receive help indicates that if she chose to cut her family ties she would have survived, but she remained with her 'inane' ideas and died as a result. ...read more.

Therefore what may well be a quite charming story, in my opinion is a story that sends out the wrong message. What she should be writing about is literature encouraging people to rise against cruel rulers and replace them with just ones, and not cover the way for more cruelty by so-called peacekeepers. In my opinion backwardness, is 'purer' and better than city life governed by Western values. In village life people have respect for others opposite to what is illustrated in 'Veronica'. People are brought up with strong characters and they have a good choice of quality in personalities. Shameful and dirty materials are not available, and children are brought up well, even though the rulers may be corrupt. However in Western countries no one has respect for each other and all are concerned with their own welfare and wealth - life is worldly and is starved of a sense of religion. Women in Westernised countries are the ones that are disrespected, ignored and put down. They are the ones that are given absolute freedom, even the freedom to sell their honour at a daily basis. It is the people in Western countries that are brought up to try in gaining material belongings only and not concern themselves with cleaning their feelings from impurities. All that matters in such Western countries is money and power and yet you find people chasing these materials and making fun of 'diverse' cultures for lack of needs when these elements have no great meaning to their lives. ...read more.