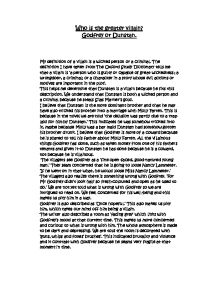 Who is the greater villain? Godfrey or Dunstan.

Who is the greater villain? Godfrey or Dunstan. My definition of a villain is a wicked person or a criminal. The definition I have taken from The Oxford Study Dictionary tells me that a villain is 'a person who is guilty or capable of great wickedness; a wrongdoer, a criminal; or a character in a story whose evil actions or motives are important in the plot'. This helps me determine that Dunstan is a villain because he fits this description. We understand that Dunstan is both a wicked person and a criminal because he steals Silas Marner's gold. I believe that Dunstan is the more dominant brother and that he may have also tricked his brother into a marriage with Molly Farren. This is because in the novel we are told 'the delusion was partly due to a trap laid for him by Dunstan.' This indicates he was somehow tricked into it, maybe because Molly was a bar maid Dunstan had somehow gotten his brother drunk. I believe that Godfrey is more of a coward because he is scared to tell his father about Molly Farren. ...read more.

His 'heavy step' indicates that he is a strong man and has authority. As Godfrey is in such a depressive mood we assume he is afraid of this approaching person. The villagers see Dunstan as 'a spiteful, jeering fellow'. This makes us believe he is a villain because the villagers are indicating it. This makes us wonder what he has done to be portrayed as this. As we read on we find out that the villagers think Godfrey is 'not half so fresh-coloured and open faced as he used to be'. This makes us wonder what is wrong and makes us feel sorry for him because he has obviously encountered some miss-fortune. We find out that the approaching person is Godfrey's brother Dunstan. This makes us wonder if there is some kind of feud going on between them, and if there is, why? Dunstan speaks to Godfrey in 'a mocking tone'. This makes us dislike Dunstan because our first impressions of him are that he is cruel. When Dunstan entered the room, the family dog went and hid. ...read more.

Godfrey that comments 'yes I daresay - trust my horse to you!'. This indicates that he knows shat his brother is like and he has done things like this more than once. This makes us pity Godfrey even more because we can see there is nothing he can do to alter the situation. Dunstan still says things to mock his brother, like 'You never hold trumps, you know; I always do'. This shows us that even though Godfrey could tell his father about the money his brother had spent - if there wasn't the chance of Dunstan telling his father about Molly - his brother still tries to taunt his brother again. The dog, which earlier hid from Dunstan, comes to lie by Godfrey for him to stroke her. This indicates that Godfrey is the gentler brother and Dunstan is by far, the most aggressive and cruel. This helps us conclude that Godfrey is more of a coward than a villain because he cannot bring himself to stand up to him brother or tell his father about Molly, whereas Dunstan is very villainous because he is a liar and a cheat and is blackmailing his brother for his own convenience. ...read more.