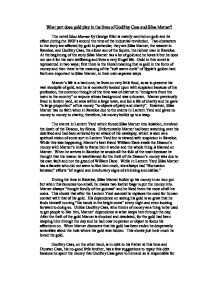 What part does gold play in the lives of Godfrey Cass and Silas Marner?

What part does gold play in the lives of Godfrey Cass and Silas Marner? The novel Silas Marner by George Eliot is mainly centred on gold and its effect during the 1800's around the time of the industrial revolution. Two characters in the story are affected by gold in particular; they are Silas Marner, the weaver in Raveloe, and Godfrey Cass, the eldest son of the Squire, the richest man in Raveloe. At the beginning of the story Silas Marner has a lot of gold and he loves it but he does not use it for his own wellbeing and lives a very frugal life. Gold in this novel is represented in two ways; first there is the literal meaning that is gold in the form of money and then there is the meaning of the "soft warm curls" of Eppie's golden hair. Both are important to Silas Marner, in their own separate ways. Marner's life is a hard one; he lives on very little food, so as to preserve his vast stockpile of gold, and he is constantly looked upon with suspicion because of his profession, the common thought of the time was of distrust to "emigrants from the town to the country" or anyone whose background was unknown. ...read more.

This is due to Godfrey Cass being extremely weak willed, due to the detail that when he was brought up without a mother and so his life lacked moral teaching and discipline, therefore, he became very weak willed and was not qualified for anything. This is the reason why he uses gold to try to keep people close to him, if he did not and his father found out about his secret marriage then he would be disinherited, a thing that Godfrey was very afraid of due to his lack of skill at anything that could earn him money. Dunstan's suggestions to Godfrey regarding the debt include selling Godfrey Cass's horse, his only one and a symbol that he is one of the richer people in town. Another of Dunstan Cass's suggestions was to rob Silas Marner and cover it up. Dunstan believes this to be a good idea because he has heard that Marner has enough money to "buy up bigger men than himself" and that he is very blind and so won't be able to see their faces. Eventually Godfrey gives in to his brother's suggestion and agrees for Dunstan to sell his horse in the next town. ...read more.

Finally, gold plays a great part in the life of Silas Marner, he firstly depends on it and when it is stolen he is very grieved but he finds Eppie to focus his affection on and soon he is no longer a miser and prefers the gold of Eppie's hair to money. Gold also plays a big part in the life of Godfrey Cass; he needs the money for his horse to pay off his father, in the early part of the story, but he never receives it. After this gold is only in Godfrey's life to be used make people serve his wants. That is until the finding of Dunstan Cass's skeleton, and Marner's money, in the stone pits close to Silas Marner's cottage. Of course the money is returned to Marner but Godfrey Cass can't help but think that the money was stolen for him and it cost his brother a greater price, his life. This is also the time when Godfrey tells Nancy, his wife, about his daughter and tries to buy Eppie back. In the end of the novel, Eppie gets married to Aaron Winthrop, the gardener at the Red House, and Godfrey Cass pays for the reception but does not attend, the final sign that he uses his money to maintain his reputation within the community. ?? ?? ?? ?? ...read more.