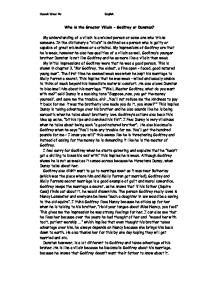 Who is the Greater Villain - Godfrey or Dunstan

Who is the Greater Villain - Godfrey or Dunstan? My understanding of a villain is a wicked person or some one who tricks someone. In the dictionary a "villain" is defined as a person who is guilty or capable of great wickedness or a criminal. My impressions of Godfrey are that he is weak, however he also has qualities of a villain as well. Godfrey's younger brother Dunstan is not like Godfrey and he us more like a villain than weak. My initial impressions of Godfrey were that he was a good person. This is shown in chapter 3, "Mr Godfrey, the eldest, a fine open - faced, good natured young man". The first time he seemed weak was when he kept his marriage to Molly Farren a secret. This implies that he was weak - willed and usually unable to think of much beyond his immediate material comfort. ...read more.

I feel sorry for Godfrey when he starts quivering and explains that he "hasn't got a shilling to bless his self with" this implies he is weak. Although Godfrey shows he is not as weak as it comes across because he threatens Dunsy, when Dunsy talks about her. Godfrey also didn't want to go to mornings meet as it was near Batherley (which was the place where him and Molly Farren got married). Godfrey and Molly Farrens secret marriage is a good example of guilt and moral cowardice. Godfrey keeps the marriage a secret, as he knows that if his father (Squire Cass) finds out about it, he would disown him. The person Godfrey really loves is Nancy Lammeter and everyone believes "such a daughter in law would be a saving to the old squire". I think Godfrey likes Nancy because he sticks up for her when he is talking to his brother, "Hold your tongue about Miss Nancy, you fool!" ...read more.

This is a great contrast to Godfrey who is a "fine, open - faced, good natured young man". Dunstan also blackmails Godfrey about his secret marriage. But I feel Molly Farren is also connected with Dunstan because she threatens Godfrey about telling his father, "she'll do as she threatens some day". This also gives me the impression that Dunstan had a hand in ensuring that he Godfrey married Molly Farren. Dunstan also tries to get wildfire off Godfrey, which he recalls as - "the last thing I've got to call my own". This implies he is a villain because Godfrey feels a lot for wildfire. However, Dunstan sells and kills the horse and then steels Silas Marner's money and runs away from Raveloe. In conclusion I think Godfrey is the weaker brother and Dunstan is the greater villain. I feel Godfrey is at the mercy of his brother because his brother knows his secret. ?? ?? ?? ?? Hannah Wood 11d English ...read more.