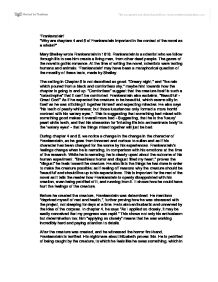 Why are chapters 4 and 5 of Frankenstein important in the context of the novel as a whole?

'Frankenstein' "Why are chapters 4 and 5 of Frankenstein important in the context of the novel as a whole?" Mary Shelley wrote Frankenstein in 1818. Frankenstein is a scientist who we follow through life to see him create a living man, from other dead people. The genre of the novel is gothic romance. At the time of writing the novel, scientists were testing humans and animals. 'Frankenstein' may have been a metaphorical question of the morality of these tests, made by Shelley. The setting in Chapter 5 is not described as good. "Dreary night," and "the rain which poured from a black and comfortless sky," maybe hint towards how the chapter is going to end up. "Comfortless" suggest that the creature itself is such a "catastrophe" that it can't be comforted. Frankenstein also exclaims, "Beautiful! - Great God!" As if he expected the creature to be beautiful, which seems silly in itself as he was stitching it together himself and expecting miracles. He also says "his teeth of pearly whiteness; but those luxuriances only formed a more horrid contrast with his watery eyes,". ...read more.

This shows not only his enthusiasm but determination too; him "applying so closely" means that he was working incredibly hard and paying attention to details. After the creature was created, and he witnessed the horror first-hand, Frankenstein is terrified. His nightmare about Elizabeth proves this. He is petrified of being caught by the creature, to which he feels like he owes something, which in reality being his creator, he does. His nightmare stresses how much it is affecting him, for being the only aspect of his life for 'nearly two years', now it has failed him he is thinking about it constantly. He is also disgusted by it - "I beheld the wretch - the miserable monster whom I had created." His 'wretch' shows his automatic, human-nature repulsion to the creature. He also displays his childlike nature when he runs from his creation. The language Mary Shelley uses is also relevant to the importance of chapters 4 and 5. She uses vivid noun phrases in the description of the creature. ...read more.

The fact that the creation of the creature is whilst the weather is stormy is also important: suggesting that as his birth is stormy, the rest of his life will just bring storm - again linking back to the hurricane. The chapters become the starting point for the horrific events of the novel, as if the one horror allows more and more to happen - Without the chapter of the creature's creation, the rest of the novel's "horrors" wouldn't be able to happen. I think Mary Shelley's description of the setting was also effective and helped contribute towards the dreary mood of the chapters. I think the would at first expect Frankenstein's creature to be beautiful and flawless as he imagined, but with the help of the scenery cues and Frankenstein's perhaps over-eagerness, the idea was carried into a sense of dread and the readers would not know what to expect of the creature. I think the readers will be left feeling tense, yet relieved that they maybe suspected the creature would not turn out perfect. Conclusively, I believe that chapters 4 and 5 set the mood for the rest of the novel with the help of the appropriately atmospheric setting, language and events. ...read more.

***
This is a good essay in many ways - it is well structured, uses well selected quotes and clearly shows an understanding of the novel. However there are some lapses in expression and although some literary terminology is used there needs to be more. Some of the ideas could be explored and developed further.