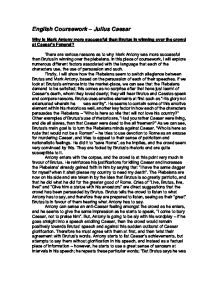 Why is Mark Antony more successful than Brutus in winning over the crowd at Caesar's Funeral?

English Coursework - Julius Caesar Why is Mark Antony more successful than Brutus in winning over the crowd at Caesar's Funeral? There are various reasons as to why Mark Antony was more successful than Brutus in winning over the plebeians. In this piece of coursework, I will explore numerous different factors associated with the language that each of the characters use, the use of persuasion and such. Firstly, I will show how the Plebeians seem to switch allegiance between Brutus and Mark Antony, based on the persuasion of each of their speeches. If we look at Brutus's entrance into the market-place, we can see that the Plebeians demand to be satisfied; this comes as no surprise after that have just learnt of Caesar's death, whom they loved dearly; they will hear Brutus and Cassius speak and compare reasons. Brutus uses emotive elements at first such as "His glory not extenuated wherein he was worthy". He seems to contain some of this emotive element within his rhetoric as well, another key factor in how each of the characters persuades the Plebeians - "Who is here so vile that will not love his country?" Other examples of Brutus's use of rhetoric are, "Had you rather Caesar were living, and die all slaves, than that Caesar were dead to live all freemen?" As we can see, Brutus's main goal is to turn the Plebeians minds against Caesar. ...read more.

I do know" - this is implying that all of what he said was factual, and he makes no effort to try and verify the accuracy of Brutus's speech, and in no way dos he try and say that Brutus's speech was true at all. Antony's speech caused slight discourse and great uncertainty with the Plebeians, and they talk amongst themselves. Antony has got them in a good position to convince them with the final strikes of verbal persuasion. The Plebeians seem to take his word as they speak and each of them encourage those who still seem to be looming more towards Brutus's notions about Caesar than Antony's to agree with what Antony is saying. The Plebeians are not as confidently pro-Caesar as they had been anti-Caesar when Brutus was speaking, but they are definitely on the verge of it and in serious contemplation. One of the Plebeians says "Poor soul, his eyes are red as fire with weeping", and this suggests that they seem to be sympathetic - another key factor which would help Antony win them over. The title that they had earlier proclaimed to Brutus was "noble", and now they seem to be entitling Antony with it - in fact, they say that "There's not a nobler man in Rome than Antony". At this point it is definitely evident that they have switched allegiance to Mark Antony, although this can be more thoroughly expressed after another portion of Antony's speech, concerning Caesar's will. ...read more.

He felt that Caesar was going to gain too much power and was afraid of this, because of Caesar's "ambition". Politically, Mark Antony is not highly suggestive of how he feels. He is simply a good friend of Caesar's and his purpose in convincing the Plebeians is not politically motivated, however, Brutus's is. When Antony reads out the will, the Plebeians become so excited about the riches they are to receive and the goodness of Caesar's generosity that they even say how they are going to "revenge his death". So from being anti-Caesar and pro-Brutus, Antony had been able to completely reverse these feelings amongst the Romans, and convert them into pro-Caesar and anti-Brutus, as well as against the conspirators in general, because the Plebeians were enraged by the murder of Caesar - however they were more concerned with those who killed Caesar rather than mourning for Caesar instead. Overall, the main persuasive device used is rhetoric - it is used extremely well by both of the speakers, however Antony proved himself to be more successful. He was so successful that he managed to convince a crowd of Romans, who must have been quite unintelligent, as they were so easily led into believing different points of view with such swift change of opinion from different speakers. If they were truly sad about Caesar's death, they would have mourned - instead they were angry, and this anger was conjured up by Antony, who managed to skip the process of grieving for Caesar with such conviction. ...read more.