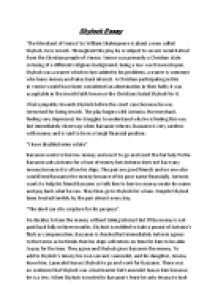 Why we feel sympathy for Shylock

﻿Shylock Essay ?The Merchant of Venice? by William Shakespeare is about a man called Shylock, he is Jewish. Throughout the play he is subject to severe racial hatred from the Christian people of Venice, Venice was primarily a Christian state so being of a different religious background, being a Jew was frowned upon. Shylock was a usurer which in fact added to his problems, a usurer is someone who loans money and takes back interest. A Christian participating in this in Venice would have been considered an abomination in their faith; it was acceptable in the Jewish faith however the Christians hated Shylock for it. I feel sympathy towards Shylock before the court case because he was terrorised for being Jewish. The play begins with Antonio, the merchant, feeling very depressed. He struggles to understand why he is feeling this way but immediately cheers up when Bassanio returns. Bassanio is very careless with money and is said to be in a tough financial position: ?I have disabled mine estate? Bassanio wants to borrow money and use it to go and court the fair lady Portia. Bassanio asks Antonio for a loan of money but Antonio does not have any money because it is all on his ships. The pair are good friends and no one else would lend Bassanio the money because of his poor name financially. ...read more.

If his bond is not granted then the decision will make a mockery of Venice and the justice system. Bassanio then tries to convince Shylock to forget the bond by arguing with him, Antonio insists it is no use as it would be impossible to soften Shylock?s: ?Jewish Heart? Bassanio, who is now financially stable offers Shylock twice the amount of money first owed but Shylock laughs at the offer and insists that he wouldn?t accept 6 times that amount. The Duke then asks Shylock why he expects mercy if he does not give it himself but Shylock replies that he has done no wrong and will have his bond! When Nerissa enters the court room dressed as a clerk, Gratiano curses Shylock saying he is: ?Inexecrable dog, whose desires are wolvish, bloody, starved and ravenous? Once again the abuse Shylock is subject to is out in the open and it is clear to see why he is so desperate to get his bond. Balthazar (Portia) grants Shylock permission to have his bond. Shylock is delighted and is just about to take the flesh when he is stopped by Balthazar, who then explains that in the bond it does indeed say that Shylock can take the flesh but if he were to shed one drop of Christian blood his house and possessions would be seized and given to the state of Venice. ...read more.

In light of all of this many feel sympathy for Shylock, I certainly do! In the early stage performances of the play Shylock is portrayed as a monster and many audiences had no sympathy at all for Shylock but, nowadays, in general many people are greatly empathic towards Shylock. This could be for a number of reasons such as: changing attitude towards religion or a changing society. I personally think that this change in attitudes is mostly down to the holocaust in World War 2. This was the mass extermination of the people the Nazi party did not like -Jewish people in the main. ? After this many people all over the world began to accept Jewish people for who they are. Actors also changed the way they play Shylock, perhaps trying to address thousands of years of hatred. The actors play a much more vulnerable and noble Shylock making the audiences show Sympathy towards him: ?I am a Jew. Hath not a Jew eyes? Hath not a Jew hands, organs, dimensions, senses, affections, passions; fed with the same food, hurt with the same weapons, subject to the same diseases, heal'd by the same means, warm'd and cool'd by the same winter and summer, as a Christian is?? This famous speech by Shylock may be getting put into action in modern day society! ...read more.