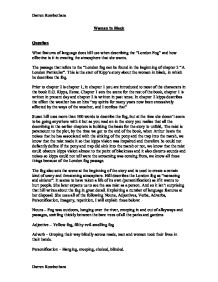 Woman in Black Question What features of language does hill use when describing the &quot;London Fog&quot; and how effective is it

Woman in Black Question What features of language does hill use when describing the "London Fog" and how effective is it in creating the atmosphere that she wants. The passage that refers to the "London fog can be found in the beginning of chapter 2 "A London Particular". This is the start of Kipp's story about the women in black, in which he describes the fog. Prior to chapter 2 is chapter 1, in chapter 1 you are introduced to most of the characters in the book E.G. Kipps, Esme. Chapter 1 sets the scene for the rest of the book, chapter 1 is written in present day and chapter 2 is written in past tense. ...read more.

mist made it so that kipps vision was impaired and therefore he could not defiantly define if the pony and trap did sink into the marsh or not, we know that the mist could obscure kipps vision almost to the point of blackness and it also distorts sounds and noises so kipps could not tell were the screaming was coming from, we know all these things because of the London fog passage. The fog also sets the scene at the beginning of the story and is used to create a certain kind of scary and threatening atmosphere. Hill describes the London fog as "menacing and sinister". ...read more.

Personification - Hanging, creeping, choked, blinded. Imagery - Sulphurous yellow, red-hot pools of light Repetition - Susan hill likes repeating a word or phrase 3 times or more for effect, e.g. "It was a yellow fog, a filthy evil smelling fog, a fog that choked and blinded, smeared and stained. It is very effective at creating the atmosphere that Susan hill wants because it makes it seem like the reader is in the story and is experiencing the effects of the fog and she uses imagery very well by making it seem that the London fog is "deadly", she uses a method called personification which makes the fog seem like a person and takes the shape of a human and is almost real ?? ?? ?? ?? Darren Rowbotham Darren Rowbotham ...read more.