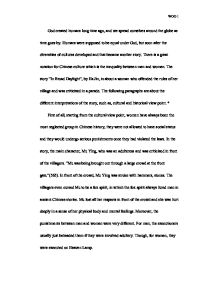 Women have always been the most neglected group in Chinese history

God created humans long time ago, and we spread ourselves around the globe as time goes by. Humans were supposed to be equal under God, but soon after the diversities of cultures developed and that became another story. There is a great notation for Chinese culture which is the inequality between men and women. The story "In Broad Daylight", by Ha Jin, is about a woman who offended the rules of her village and was criticized in a parade. The following paragraphs are about the different interpretations of the story, such as, cultural and historical view point. * First of all, starting from the cultural view point, women have always been the most neglected group in Chinese history, they were not allowed to have social status and they would undergo serious punishments once they had violated the laws. In the story, the main character, Mu Ying, who was an adulteress and was criticized in front of the villagers. ...read more.

Old Chinese villagers considered Heaven Lamp as a punishment justified by Heaven, and they named it by Heaven Lamp. Also, in Chinese history, women were not allowed to have a free will to choose their love. "My man is nothing. He is no good, I mean in bed. He always comes before I feel anything" (567). This is the quote which Mu mentioned in the story. "...no woman would marry such a dwarf." (566). This quote describes the look of Meng Su, the husband of Mu Ying. Mu ying was such a beauty in the town, "...perhaps the best looking woman in the village...but because of her long legs and arms she appeared rather queenly. While most of the women has sallow faces, hers looked white and healthy like fresh milk." (565). From the three quotes above, readers could deduce that Mu Ying was not having a happy marriage with her husband and that was one of the reasons for her to commit adultery. ...read more.

The villagers also only blamed Mu Ying as the key leading to the adultery and they did not accuse the men involved in the event. Mu Ying also dragged money from the big officer and the peasant after sleeping with them, but the villagers' were only concerning the guilt that Mu Ying bare, "how shall we handle this parasite that sucked blood out of a revolutionary officer?" (569). Last but not least, women at that time period were under a great pressure from their culture and males, likewise, they just poured their anger and depression against men towards Mu Ying being criticized in the parade. Most of the women were involved in this criticism and they cursed Mu Ying most frequently. Some even yelled to quarter her by horses. As Mu Ying became the focus in the village, she bared all the disrespectful acts against women, "you must confess everything. It's up to you now." (567). ?? ?? ?? ?? WOO 1 ...read more.