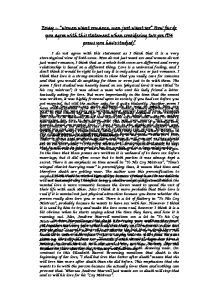 &quot;Women want romance, men just want sex&quot; How far do you agree with this statement when considering two pre 1914 poems you have studied?

Essay - "women want romance, men just want sex" How far do you agree with this statement when considering two pre 1914 poems you have studied? I do not agree with this statement as I think that it is a very stereotypical view of both sexes. Men do not just want sex and women do not just want romance, I think that as a whole both sexes are different and every relationship is based on a different thing. Love is a universal feeling, and I don't think it would be right to just say it is only about sex or just romance. I think that love is a strong emotion to show that you really care for someone and that you would do anything for them or even just to be with them. The poem I first studied was heavily based on sex (physical love) it was titled "to his coy mistress"; it was about a man who sent his lady friend a letter basically asking for love. But more importantly in the time that the sonnet was written, it was highly frowned upon in society if you had sex before you got married, but still the author asks for it quite blatantly. ...read more.

In the time that these poems are written it is unheard of to have sex before marriage, but it did often occur but to both parties it was always kept a secret. There is an emphasis on time aswell in "To His Coy Mistress", "Time's winged chariot hurrying near" is personifying time, it means that time and therefore death are getting near. The author uses this personification to emphasise the rush on their relationship, because if they leave it too late she will not remain pretty therefore being a shallow relationship it will end. I think that the mental type of love is more romantic as the sexual love will not last and I don't think it is very nice to use people for sex. I think the mental love is more romantic because the lovers want to spend the rest of their life with each other. Also I think it is more probable that their love is real if it is mental not just physical attraction because you know whether the person really does love you or not. There is a lot of flattery in "To His Coy Mistress", probably because he wants to have sex with her. ...read more.

Whereas Andrew Marvell just wants sex so death will stop that and so will his love for his "Coy Mistress". In the two poems there is an underlying theme about death and how the authors view this. In "To His Coy Mistress" death is the end and the end of love, it is non-avoidable and it's inevitable. However, in "How Do I Love Thee?" death is only a small object in the way of life and it shouldn't stop their love "I shall but love thee better after death". In fact she say's it will improve their love, she maybe referring to the quote "absence makes the heart grow fonder". Another theme is time, in both poems it is there but in "To His Coy Mistress" it is more obvious. Andrew Marvell wants a quick and sexual relationship, "The long pressured virginity" he doesn't want it to last because he makes her aware that after a while he will not be interested, "Thy beauty shall no longer be found". Whereas in "How Do I Love Thee?" the emphasis is not on time because she is not bothered about how long they have, "by sun and candlelight". By Jonathan Sword ...read more.