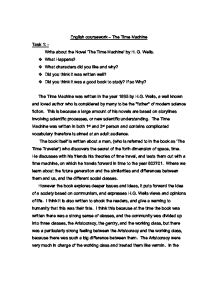 Write about the Novel 'The Time Machine' by H. G. Wells.

English coursework - The Time Machine Task 1: - Write about the Novel 'The Time Machine' by H. G. Wells. * What Happens? * What characters did you like and why? * Did you think it was written well? * Did you think it was a good book to study? If so Why? The Time Machine was written in the year 1895 by H.G. Wells, a well known and loved author who is considered by many to be the "father" of modern science fiction. This is because a large amount of his novels are based on storylines involving scientific processes, or new scientific understanding. The Time Machine was written in both 1st and 3rd person and contains complicated vocabulary therefore is aimed at an adult audience. The book itself is written about a man, (who is referred to in the book as 'The Time Traveler') who discovers the secret of the forth dimension of space, time. He discusses with his friends his theories of time travel, and tests them out with a time machine, on which he travels forward in time to the year 802701. ...read more.

This helps explain the similarities between today's generation and the future generation. I think H.G. Well's idea is that the Aristocracy evolve into these "weak and little, childlike creatures" unable to do anything for themselves and hopelessly weak and flimsy. Whereas the working class develop into these "brutish" 'Morlocks' who are in charge of and feed on the 'Eloi'. The idea is that the Eloi were once in charge (like the Aristocracy) and that the Morlocks were their "mechanical servants" (like the working class were to the Aristocracy). Then the Morlocks grew strength and became stronger then the Eloi therefore resulting in reverse positions. I think H.G. Wells might have done this because he himself was in the working class (being an author) and felt that the Aristocracy trod all over them (so to speak). He wanted to see a change in Social Positions and the Working Class getting back at the Aristocracy for everything they had done. I also noticed that all the characters in the book apart from the 'Eloi' and the 'Morlocks' were Working class and this might have had something to do with it. ...read more.

The mouths were small, with bright red, rather thin lips, and their little chins ran to a point..." I particularly like this because it's so descriptive and really paints a picture of what the 'Eloi' look like. It also goes back to the idea that he is taking in a lot of his surroundings with the fact that he notices that they don't have any hair on their faces, this is something you probably wouldn't noticed inless you were very alert. I think 'The Time Machine' is a well written and thought out book, and it contains lots of descriptive language, which helps to develop your own descriptive language and encourages you to give descriptive writing a go. It is also in my opinion a good book to study because it increases your vocabulary and the ways in which you use it as well as your level of understanding. It discusses matters, which are difficult to explain, and leaves us thinking. I also found it brings up some deep questions which we are unable to answer things like where are we heading? What is it going to be like in the end? and, Will the things we do today have an impact on the future? ...read more.