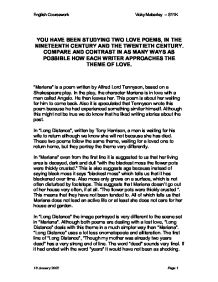 You Have Been Studying Two Love Poems, In the Nineteenth Century and the Twentieth Century - Compare and Contrast In As Many Ways As Possible - How Each Writer Approaches the Theme of Love.

YOU HAVE BEEN STUDYING TWO LOVE POEMS, IN THE NINETEENTH CENTURY AND THE TWENTIETH CENTURY. COMPARE AND CONTRAST IN AS MANY WAYS AS POSSIBLE HOW EACH WRITER APPROACHES THE THEME OF LOVE. "Mariana" is a poem written by Alfred Lord Tennyson, based on a Shakespeare play. In the play, the character Mariana is in love with a man called Angelo. He then leaves her. This poem is about her waiting for him to come back. Also it is speculated that Tennyson wrote this poem because he had experienced something similar himself. Although this might not be true we do know that he liked writing stories about the past. In "Long Distance", written by Tony Harrison, a man is waiting for his wife to return although we know she will not because she has died. These two poems follow the same theme, waiting for a loved one to return home, but they portray the theme very differently. In "Mariana" even from the first line it is suggested to us that her living area is decayed, dark and dull "with the blackest moss the flower pots were thickly crusted." ...read more.

Mariana holds on to her raw love due to the same reasons, but she also has the hope that he might return someday. We learn much from the first verses of each poem. In "Mariana" we learn that to her, her environment is dark and full of despair, "with the blackest moss the flower pots were thickly crusted... The rusted nails fell from the knots that held the pear to the gable wall. The broken sheds... Unlifted was the clinking latch". This all describes her life not moving from her house, just sitting in misery. In "Long Distance" we learn that the father stays in his home to be reminded of his wife who was warm and kind, "slippers warming by the gas, put hot water bottles by the side of her bed and still went to re-knew her transport pass" This gives us an insight into the father's life. I believe he is kind as was his wife. ...read more.

At the end of "Long Distance" the writer tells us obliquely that his father has died now too. He also indicates that he thought his father was foolish for acting the way he did. He then changes the mood of the verse by saying that although he doesn't pretend that his parents have "both gone shopping" he has still added their phone number to his new phone book. He now understands the way his father felt. He uses the metaphor "the disconnected number I still call" to describe his feelings: he wants to keep in contact with his parents but cannot because they are gone. The ending to this poem is vital to the understanding of the title. At the very end of "Mariana" the four end lines, which are repeated loosely at the end of all verses, are significantly changed. This sums up the fact that she has now completely lost hope of her lovers return. This is like the writer in "Long Distance" coming to terms with the fact that both of his parents are now dead. English Coursework Vicky Maberley - S11K 18 January 2002 Page 1 ...read more.