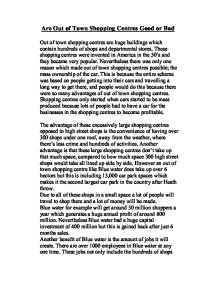 Are out of town shopping centres good or bad?

Blue water for example will get around 30 million shoppers a year which generates a huge annual profit of around 800 million. Nevertheless Blue water had a huge capital investment of 400 million but this is gained back after just 6 months sales. Another benefit of Blue water is the amount of jobs it will create. There are over 1000 employees in Blue water at any one time. These jobs not only include the hundreds of shops but the security, restaurants, entertainment, cleaners, managers, admin staff, reception etc. These shopping centres obviously have huge benefits but as said previously the entire scheme of out of town shopping centres is based on cars. ...read more.

So over time they close down. The shops within 6km of Blue water in 1999 (when Blue water opened) had a drop in sales of 70%. This obviously resulted in the closure of virtually all of the shops and left thousands of people unemployed with no money and eventually forced to go and work for one of the large shops chains in Blue water or move elsewhere in search of another place to set up a business. Shopping centres have massive benefits but at a heavy cost of leaving so many people unemployed. Does the good out way the bad? I don't think it does as a lot more people loose out than gain. Therefore the building of Blue water is not justified. ...read more.