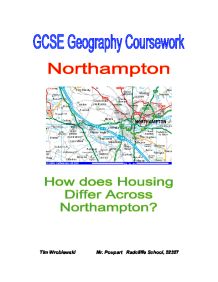 How does housing differ across Northampton?

Contents Contents 2 Introduction 3 Hypothesis 5 Data Collection Charts 6 Primary Data Collection Chart 6 Secondary Data Collection Chart 6 Data Presentation 8 People Count 8 Traffic Survey 10 Environmental Survey 13 Photographs 15 Photographs 16 House Prices 21 Census Data 22 Analysis 24 People Count 24 Traffic Survey 24 House Prices 24 Census Data 26 Conclusion 27 Evaluation 28 Figure Table 29 Bibliography 30 Introduction There are three different areas within a city; CBD (Central Business District), Inner City and Outer City. These different areas depict different types of residential, industrial and commercial land use. For my GCSE coursework I am going to investigate the different types of residential land use across the city; once in the CBD, once in the inner city and once in the outer city. Northampton from the Prospective of the Concentric Zone Model Northampton is a large town situated in the East Midlands between London and Birmingham along the M1. It has a population of approximately 180,000. It is a perfect example of what a town should be laid out like; older buildings in the middle gradually working out to newer ones on the outside. Most old industries in Northampton focused on shoe production but nowadays due to globalisation many of these businesses have moved away and Northampton now plays host to a huge variety of businesses. The CBD is home to many commercial businesses, residential areas and shopping streets. The CBD in all towns is the first to be established and therefore it contains many old buildings. ...read more.

I used the following categories to survey the environment; vandalism, litter, road crossings car parking, gardens, open space, other features, house maintenance, building materials and housing layout and design. A score of 1 is good and 5 is bad. Far Cotton East Hunsbury Far Cotton Renewal City Centre Photographs I took photographs in all 4 areas. The photographs were taken so that I could clearly show evidence to my conclusions in pictures. East Hunsbury Far Cotton Far Cotton Renewal City Centre House Prices The following data came from www.proviser.com Error! Not a valid link. Census Data Population Structure Composition of households Tenure of houses Household amenities Analysis People Count The following analysis refers to figures 3.1, 3.2, 3.3, 3.4, 3.5 and 3.6. The people count was a success as it showed me the busiest place in terms of pedestrians that I surveyed. In this case the busiest was the city centre. I recorded 12 children, 11 teenagers, 112 middle age and 21 senior citizens. This is understandable because Northampton's population and tourists would be going into the city centre as this is where all of Northampton's major shops and places to eat are. The high number of middle aged people will be because at the time I did the survey it was lunch break for a lot of workers. The second highest number of people was recorded in Far cotton. This was 2 middle age and 1 senior citizen. The third highest recorded number of people was in East Hunsbury. ...read more.