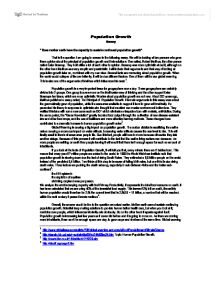 Population Essay. Does mother earth have the capacity to sustain continued population growth

Population Growth Essay " Does mother earth have the capacity to sustain continued population growth" That is the question I am going to answer in the following essay. We will be looking at two persons who gave there opinion about the principal of population growth and their solutions. One called, Robert Malthus, the other person called Ester Boserup. They both differ a lot of each other in opinion. Boserup was more optimistic about it, although on the other hand Malthus was very sceptic and pessimistic. I will include their arguments and their way of looking at population growth later on, combined with my own view. Several facts are concurring about population growth. When the world would collapse of its own infirmity, it will be due different factors. One of them will be due global warming. ...read more.

These changes have contributed to a dramatic increase in human population growth rates2. Global Warming is causing a big impact on population growth. The carbon dioxide is sacrificing the earths nature causing a enormous impact on water altitude. Increasing water altitude causes the sea level to rise. This will finally result in floods of areas were people life. Due this fact, people will have to move because otherwise they risk another deluge. Because of this process it will contribute to the fact that the earths living surface can decrease. As more people are settling on earth then people leaving it will result that there isn't enough space for such an amount of inhabitants. If you look at the facts of Population Growth, it will tell you that, every minute there are 5 babies born. ...read more.

Overall, the answer would be No to the question we asked earlier. Mother earth cannot sustain continuing population growth. Scientist keep making solutions to provide human better health care, but when you look at it, medicine cure people, which influences Mortality rate obviously. So on the other hand it speaks against itself. Population growth is increasing last few years as it never did before and it is going to move on. As there are coming more inhabitants, there won't be enough space one day, to grow crops and shelters at the same time. Global warming is causing the world the heat up, increasing sea level and destroy rainforest (one of our big food resources on earth) With analysis we have proved that, if we continue population growth, it will one day eat its self. 1 http://www.globalissues.org/article/708/global-warming-and-population#PopulationandClimateChange 2 http://darwin.bio.uci.edu/~sustain/bio65/lec24/b65lec24.htm Topic: Human Population Growth. 3 http://news.bbc.co.uk/1/hi/sci/tech/315229.stm 4 http://dieoff.org/page5.htm ?? ?? ?? ?? ...read more.

Overall rating: 3 out of 5.
- Many key terms, concepts and issues have been covered. However, in many cases the wording of them or surrounding them is not accurate or needs more detailed explanation.
- Some accurate use of referencing, though again this needs to be checked for accuracy of the information.