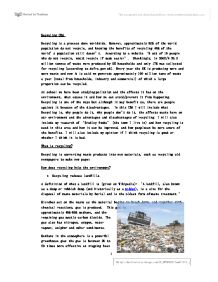 Recyling. In this CDA I will include what Recycling is, why people do it, why people dont do it, the affects waste have on our environment and the advantages and disadvantages of recycling. I will also include my research of Bradley Stoke (the to

Recycling CDA Recycling is a process done worldwide. However, approximately 65% of the world population do not recycle, and knowing the benefits of recycling 40% of the world's population still doesn't. According to a website '9 out of 10 people who do not recycle, would recycle if made easier'. Shockingly, in 2003/4 30.5 million tonnes of waste were produced by UK households and only 17% was collected for recycling (according to defra.gov.uk). Every year the UK is producing more and more waste and now it is said we generate approximately 100 million tons of waste a year (total from households, industry and commercial) of which a large proportion can be recycled. At school we have been studying pollution and the affects it has on the environment, what causes it and how we can avoid/prevent it from happening. Recycling is one of the ways but although it may benefit us, there are people against it because of the disadvantages. In this CDA I will include what Recycling is, why people do it, why people don't do it, the affects waste have on our environment and the advantages and disadvantages of recycling. I will also include my research of 'Bradley Stoke' (the town I live in) and how recycling is used in this area and how it can be improved, and how people can be more aware of the benefits. I will also include my opinion- if I think recycling is good or whether I think it is bad. What is recycling? Recycling is converting waste products into new materials, such as recycling old newspapers to make new paper. How does recycling help the environment? * Recycling reduces landfills. A definition of what a landfill is (given on Wikipedia): 'A landfill, also known as a dump or rubbish dump (and historically as a midden), is a site for the disposal of waste materials by burial and is the oldest form of waste treatment.' ...read more.

So I believe that if recycling is more readily available and easier to do, more people would recycle. Another example is that someone who didn't recycle said they didn't have a local recycling bank, and a way to improve recycling services was to have more recycling banks. Also, they believed that recycling is a complicated process. So if recycling is made easier, there is a possibility that they would recycle. Personally, I believe that the only major disadvantage of recycling is the cost involved in the process. 4 out of the 10 people I asked agree with me that a disadvantage of recycling is that it 'costs a lot of money'. Also, apparently recycled products are more expensive than new products. So people are encouraged to buy the same product, but a cheaper version. So unless costs go down, then recycling will be seen as something more beneficial for not only the environment, but for money saving. One person questioned, believed that in order for Bradley Stoke to improve its recycling service was to increase awareness and another person said to teach it more at school. I agree with both of these answers because increasing awareness and letting people know from an early age about the benefits of recycling will encourage them to do so in the present and the future. Increasing awareness is good because, as the costs of the process of recycling is high, then people need to be persuaded that the benefits are more overpowering than the negatives. Finally, I would like to clarify that before I had to do research about recycling, I was more unaware of the benefits and also the negatives of recycling, and I didn't have a deep understanding of landfills and how they are bad towards the environment. But still, taking into account the negatives that I have learnt through my research and the positives of recycling, I still think it is a more beneficial thing to do. Until there is increased awareness, many people will be uninformed by means of why people should recycle. ...read more.