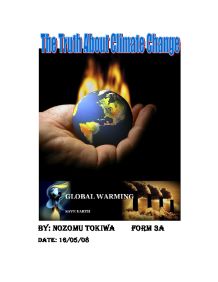 The Truth about Climate Change

BY: Nozomu Tokiwa Form 3a Date: 16/05/08 Climate Change I'm sure you've heard or read about climate change at least once or twice on TV, Internet or on newspapers. But are you sure that you know everything or at least enough about it? Well let's see, did you know that climate change is one of the biggest problems we have now in this 21st century? If not, you should continue reading, and if yes, you should still read. Because what I'm going to talk about now, is about climate change, and I'm sure that you don't know everything about it. This might be your final chance before it's too late! What is climate change? When you simply switch the words round, climate change is simply the change in climate. It is the change in climate, but of course it is not that simple. The IPCC, Intergovernmental Panel on Climate Change (one of the largest bodies of international scientists ever assembled to study a scientific issue, comprised of more than 2000 scientists from 100 different countries), defines climate change like this: "A change in the state of the climate that can be identified...that persists for an extended period, typically decades or longer...Any change in climate over time, whether due to natural variability or as a result of human activity." This definition is thought to be most widely accepted, but it is quite hard to understand...(at least for me it is) so this is what it means in easier language: climate change is any significant change in the "average weather", in a given region, over a time period that ranges from decades to centuries. (Just to make sure, climate change is a long-term thing, so it is not something like 'today is a bit warmer than yesterday so this is climate change'). This change in the "average weather" may include the change in the average temperature, humidity, air pressure, precipitation, and wind patterns. ...read more.

� An upsurge in the amount of extreme weather events, such as wildfires, heat waves, and strong tropical storms, is also attributed in part to climate change by some experts. And here are some of the things that can happen in the future that's not so far away...(reported by the IPCC): �Sea level could rise between 7 and 23 inches (18 to 59 centimeters) by century's end. Rises of just 4 inches (10 centimeters) could flood many South Seas islands and swamp large parts of Southeast Asia. � Some hundred million people live within 3 feet (1 meter) of mean sea level, and much of the world's population is concentrated in vulnerable coastal cities. � Glaciers around the world could melt, causing sea levels to rise while creating water shortages in regions dependent on runoff for fresh water. � Strong hurricanes, droughts, heat waves, wildfires, and other natural disasters may become commonplace in many parts of the world. The growth of deserts may also cause food shortages in many places. � More than a million species face extinction from disappearing habitat, changing ecosystems, and acidifying oceans. � The ocean's circulation system, known as the ocean conveyor belt, could be permanently altered, causing a mini-ice age in Western Europe and other rapid changes. � At some point in the future, warming could become uncontrollable by creating a so-called positive feedback effect. Rising temperatures could release additional greenhouse gases by unlocking methane in permafrost and undersea deposits, freeing carbon trapped in sea ice, and causing increased evaporation of water. So who is Contributing the Most to Global Warming? To find this out, let's change the question, 'who is contributing the most to global warming', into which country is emitting the most amount of GHG (greenhouse gases) in total, and per person per country since the main cause of global warming is thought to be the greenhouse gases which trap the heat as I explained before. ...read more.

Also, when they publish a report or a book, the editor of it has to also be a scientist to be able to check the work, meaning that the work by a scientist is checked by another scientist, so I would say that it is really trustable. I also used the report from the United Nation's IPCC (and websites which people wrote what the IPCC said, but in a simpler way), and they surely are trustable, because the IPCC or the International Panel on Climate Change, are one of the largest bodies of international scientists ever assembled to study a scientific issue, and they are comprised of more than 2000 scientists from 100 different countries. The table which I had about which country is emitting the most CO2 was taken from CAIT, the climate analysis indicators tool, developed by the World Resources Institute. I think that they are trustable, or at least they had the most recent and trustable information out of all the websites I looked. Overall, I think that my evidences were trustable, and quite up-to-date. Conclusion During working on this project about climate change, I personally learned a lot about global warming and climate change. Honestly, I've never even cared seriously about global warming, and I actually didn't really know much about it. But now I do, and I hope you do as well! As a conclusion, I'd like to say that we all have to work together to overcome this whole big problem about climate change, and so I hope that all of you who read this will tell everyone else about it and to take action! Thank you very much for reading my report "the truth about climate change". Here's the list of websites I used to write this report: http://www.ec.gc.ca/climate/overview_what-e.html http://en.wikipedia.org/wiki/Climate_change http://en.wikipedia.org/wiki/Global_warming http://www.grinningplanet.com/2007/01-02/global-warming-vs-climate-change.htm http://www.lifeofearth.blogspot.com/ http://www.fightglobalwarming.com/page.cfm?tagID=135 http://earth911.org/blog/2007/08/17/green-forum-global-warming-vs-climate-change/ http://www.windows.ucar.edu/tour/link=/earth/climate/cli_effects.html http://staffwww.fullcoll.edu/tmorris/an_inconvenient_truth/an_inconvenient_truth.htm http://www.epa.gov/climatechange/basicinfo.html http://www.davidsuzuki.org/Climate_change/science/skeptics.asp http://www.globalissues.org/EnvIssues/GlobalWarming.asp http://news.nationalgeographic.com/news/2004/12/1206_041206_global_warming.html http://www.climatecrisis.net/thescience/ http://www.lenntech.com/greenhouse-effect/fossil-fuels.htm http://www.foe.co.uk/campaigns/climate/issues/climate_change/ http://ecohealth101.org/temperature/temp1.html http://www.ipcc.ch/ipccreports/ar4-syr.htm http://www.ipcc.ch/pdf/assessment-report/ar4/syr/ar4_syr.pdf http://www.digitaljournal.com/article/162241/17_200_Scientists_Dispute_Global_Warming http://www.greenhouse.gov.au/science/faq/question2.html http://www.greenhouse.gov.au/science/faq/question2.html http://hdgc.epp.cmu.edu/teachersguide/teachersguide.htm http://www.greenhouse.nsw.gov.au/what_is_climate_change http://www.globalwarmingart.com/ http://www.gcrio.org/gwcc/part1.html http://www.environment-agency.gov.uk/fun/369960/519234/1005981?pop2=on http://www.effectofglobalwarming.com http://timeforchange.org/cause-and-effect-for-global-warming http://www.opendemocracy.net/globalization-climate_change_debate/2558.jsp http://www.gcrio.org/ipcc/qa/03.html http://science.nationalgeographic.com/science/environment/global-warming/gw-effects.html http://news-service.stanford.edu/pr/03/root18.html http://www.mmah.org/page15/page15.html http://en.wikipedia.org/wiki/List_of_countries_by_greenhouse_gas_emissions_per_capita http://en.wikipedia.org/wiki/List_of_countries_by_carbon_dioxide_emissions_per_capita http://www.ucsusa.org/global_warming/science/each-countrys-share-of-co2-emissions.html http://www.thehcf.org/images/2007/5B_Co2_v2S.jpg http://www.thehcf.org/emaila5.html http://cait.wri.org/cait.php?page=yearly&mode=view&sort=val-desc&pHints=shut&url=form&year=2004&sector=natl&co2=1&update=Update http://cait.wri.org/cait.php?page=background&from=yearly http://cait.wri.org/ http://cdiac.esd.ornl.gov/trends/emis/tre_coun.htm http://www.epa.gov/climatechange/kids/difference.html http://www.gcrio.org/ipcc/qa/04.html http://www.worldwildlife.org/climate/index.html ...read more.