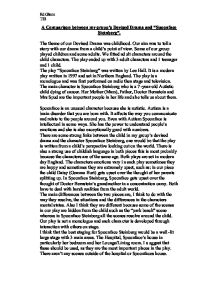 A Comparison between my group's Devised Drama and &quot;Spoonface Steinberg&quot;.

A Comparison between my group's Devised Drama and "Spoonface Steinberg". The theme of our Devised Drama was childhood. Our aim was to tell a story with our drama from a child's point of view. Some of our group played children and some adults. We fitted adult characters around the child characters. The play ended up with 3 adult characters and 1 teenager and 1 child. The play "Spoonface Steinberg" was written by Lee Hall. It is a modern play written in 1997 and set in Northern England. The play is a monologue and was first performed on radio then stage and television. The main character is Spoonface Steinberg who is a 7-year-old Autistic child dying of cancer. Her Mother (Mam), Father, Doctor Bernstein and Mrs Spud are the important people in her life and she tells us about them. ...read more.

In Spoonface Steinberg, Spoonface gets upset over the thought of Doctor Bernstein's grandmother in a concentration camp. Both have to deal with harsh realities from the adult world. The main differences between the two pieces are, I think to do with the way they resolve, the situations and the differences in the characters mental states. Also I think they are different because some of the scenes in our play are hidden from the child such as the "park bench" scene whereas in Spoonface Steinberg all the scenes resolve around the child. Our play is not a monologue and each character is developed through interaction with others on stage. I think that the best staging for Spoonface Steinberg would be a well-lit large stage with 3 main areas. The Hospital, Spoonface's house in particularly her bedroom and her Lounge/Living room. I suggest that these should be used, as they are the most important places in the play. ...read more.

The surprise party leads to a argument which is the total reverse to the nature of the build up to the party. In our piece we managed to keep the child as the main focus by basing the play around her. In the scene where Daisy is thinking about the death of her mother we use an extract from Spoonface Steinberg were she tries to puzzle out what death is. We used this extract to show that the child is remembering all the good things about her mother and then all the good things about life and how it just goes on day after day. In conclusion I can see why writers such as Lee Hall use child characters to base their play about as they bring a whole new perspective to the play with their innocence, imagination and humour. From doing the Devised piece I can see that basing the play around a child character could help in bringing a new meaning to a performance. The audience is let into a unique and private world. Ed Glenn T22 ...read more.