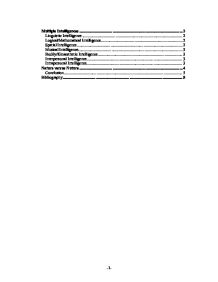 Almost all in this society has heard of the term intelligence. And probably used it in their daily language, in school at work et cetera. But were does intelligence come from? And what types of intelligence are there?

It requires a capacity to perceive and be responsive to the moods and desires of other peoples. An interpersonally intelligent person may be compassionate and socially responsible or manipulative and cunning, but they all have the ability to get inside skin of another person and view world from that individual's perspective. Intrapersonal Intelligence � Likes to: work alone and pursue own interests. � Is good at: understanding self, focusing inward on feelings/dreams, following instincts, pursuing interests/goals and being original. � Learns best by: working alone, individualised projects, and having own space. Finally there is intrapersonal intelligence, or the intelligence of the inner self. People strong in this kind of smart easily access their own feelings, discriminate between kinds of inner emotional states, and use self-understanding to enrich and guide their lives. Most are independent people who either are very introspective and enjoy forms of deep soul-searching, or are fiercely independent, highly goal-directed, and intensely self-disciplined. Despite of these different categories there are no clear lines to what is dividing them apart, a human being is often the strongest in several areas, not just one. Think of your upbringing, what if you are really good at interpersonal and linguistic activities, does this come from the environment you grew up in or has your genes something to do with it. What if you, instead of growing up in a stimulating and loving family (remember, this is just an hypothetical case, not taken seriously) ...read more.

Genetic inheritance on the other hand has got a role in the development of intelligence. Take the extreme example of a pair of MZ1 twins being separated at birth and raised in different homes (homes of different social/economic classes). Child one is reared in a middle-class family and, when reached an appropriate age, put in one of the finest schools in the country. Child two is brought up to be a labourer, has no formal education. Will their intelligence levels be any different or is it going to be a significant difference? Real live studies have been made in this was, but the answers had not been conclusive. There was a degree of doubt if the twins knew each other and did not admit it to the researchers or if they had spent some time together when small, thus sharing some experiences that can affect their intelligence levels. Conclusion Although there is a fierce debate going on to decide the factors that influence intelligence quotients there is still a lot of uncertain aspects. What if both nature and nuture plays a role in the amount of intelligence held? Thus, objective views on the situation now hold both environmental and genetic characteristics as affecting the intelligence of a child. I believe this is a correct assumption. No child can escape the fate of what it genes present to it, but it can also be influenced to its surroundings. I cannot imagine there is a sole factor having the leading role in the decision of intelligence. But the one thing I can't understand is why intelligence is so important. ...read more.