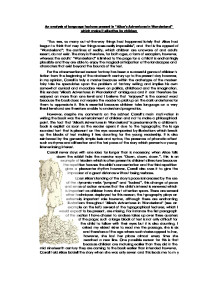 An analysis of language features present in

An analysis of language features present in "Alice's Adventures in Wonderland" which make it effective for children "You see, so many out-of-the-way things had happened lately that Alice had begun to think that very few things were really impossible", and that is the appeal of "Wonderland"; the confines of reality, which children are unaware of and adults resent, do not exist. The story is therefore, for both ages, a form of escapism, however, whereas the adults' "Wonderland" is limited to the page for a child it is enchantingly plausible and they are able to enjoy the magical anticipation of the landscapes and characters that exist beyond the bounds of the text. For the aforementioned reason fantasy has been a successful genre of children's fiction from the beginning of the nineteenth century up to the present day however, in my opinion, Carroll is truly a master because within the archetype of the modern fairy tale he speculates upon the problem of fantasy writing and implies his own somewhat cynical and macabre views on politics, childhood and the imagination. This renders "Alice's Adventures in Wonderland" ambiguous and it can therefore be enjoyed on more than one level and I believe that "enjoyed" is the correct word because the book does not require the reader to pick up on the dark undertones for them to appreciate it. This is essential because children take language on a very literal level and are therefore unable to understand pragmatics. However, despite my comments on the subtext Carroll's main motivation in writing the book was the entertainment of children and not to make a philosophical point. The fact that "Alice's Adventures in Wonderland" is predominantly a children's book is explicit as soon as the reader opens it due to the typography; the large rounded font that is pleasant on the eye accompanied by illustrations which break up the blocks of text making it less daunting for the young readership. ...read more.

Carroll also uses alliteration and sibilance when he writes about the "long, low hall" and how the White Rabbit was "still in sight", it could also be argued that "White Rabbit" is also an example of alliteration when read aloud by children who have a tendency to pronounce R's as W's. The repetition of sounds is a very effective way of focusing children's attention which, as I mentioned earlier, is extremely important, as is the child's understanding of the story. In the sample I looked at there was only one word that my sister did no know; "earnestly". In most children's books there are usually one or two examples of polysyllabic lexis because it helps build the child's vocabulary however, if the usage is too frequent the child gets frustrated with having to continually ask the adult what the words mean and abandons the book. My sister also struggled with the words "answer", "dozing, "saucer", and "fountain" however, she would recognise them if she heard them again indicating that "Alice's Adventures in Wonderland" is a book that should be read to the child. However, in general the lexis is quite simple with none of the words in my sample having more than three syllables. The use of adjectives and adverbs is also limited with no more than one used to describe each noun or verb respectively, for example the leaves are "dry" and Alice walked "sadly", if more than one adjective or adverb were used the child would become confused. Even when Alice views the garden for the first time its beauty isn't depicted through a long description, instead the superlative "loveliest" and the verb "longed", which isn't common in children's literature and therefore has a greater impact on the reader are used and the psychological phenomenon that humans want something more if they can't have it is put into practice to make the garden tantalising for the child thus increasing their willingness to hear the story to the end in order to see if Alice gets there. ...read more.

that has come before in order to make sense of what they are being told and, additionally, many of the details are related to Alice's movement and therefore are insignificant to the plot. When Carroll is describing places and objects, something which requires the child to form a visual impression of the information, the syntax becomes far simpler; "Suddenly she came upon a little three-legged table, all made of solid glass, there was nothing on it except a tiny golden key." In order to minimise confusion Carroll also uses a simple narrative discourse structure so although the story is told in the past tense the events between Alice's fall and her waking up are detailed in chronological order. This is well suited to "Alice's Adventures in Wonderland" because it clearly and logically shows Alice's journey from childhood into the adult world as her adventure progresses. Although Carroll is rebelling against the moralistic stories abundant in the Victorian era Alice's "adventure" is beneficial for the child because it deals with the issue of growing up; something the child will have to do. However, I do not believe that Carroll wrote "Alice's Adventures in Wonderland" for the purpose of helping children through the transitional stage of their lives; I think he wrote it to make children happy. If this was Carroll's objective, he has been successful due to his clever use of numerous linguistic features. Firstly he realises that children need to be able to understand the story and simplifies his structure, lexis, syntax and imagery accordingly, secondly that an adult is likely to read the book to the child and therefore they also need to be interested and thirdly, and possibly most importantly, that children read with all of their senses and in order to keep interest them and hold their attention a story must appeal to their sense of hearing through the use of phonetic effects, sight through illustrations and scent, smell and touch through the descriptions present in the text. ...read more.